The Tower Defense style of game has always been very popular among gamers. What if you add in Role Playing Game (RPG) element and give it a new twist? Defender Chronicles: Legend of The Desert King is one such game that is going to make you stare at your iPhone hours after hours.

Defender Chronicles: Legend of the Desert King is not the latest game in town, but it is one that makes me yearn for more. I can’t remember how many hours I have spent trying to complete the maps and power up my heroes. Like any other tower defense game, your aim is to build obstacles along the enemy’s path and prevent them from reaching the destination.

There are seven maps for you to crack and each map comes with four different difficulty levels: Novice, Casual, Master and Heroic. The easiest being Novice and the most difficult is Heroic. You can first start with Novice or Casual. The Master and Heroic mode are only available when you have completed the Casual and Master mode respectively.

Defender Chronicles is a fixed path TD, which means you can only place your guilds at predetermined location. There are three kind of guilds that you can build: warriors guild, archers guild and mage guild. The mage guild is not available for the first few maps and is only unlocked when you achieved a certain level. The archers guild is the most versatile tower as it can hit both land and air creatures, but it can’t stop enemies from walking pass it. Warriors guild is effectively at stopping down the enemies. The mage guild is the most powerful tower, but it is also the slowest.

Throughout the game play, I discovered that the emphasis is not on where to put your towers, but which tower to place at each location. There are plenty of locations (too many that I can’t fill them up  in some maps) where you can place your guild, so it is in a way similar to those freestyle TD game. The pace of the game is very fast and it requires you to make quick decision. Yes, a lot of trial and error is required too.

The control of the game is extremely easy. Tap on the specific location follow by the guild that you want to build. Upgrading and selling of guilds is also a matter of simple tapping. As I mentioned earlier, this game is pretty fast-paced, so it is necessary to simplify the control as much as possible.

The RPG element is what set DC apart from other TD games. At every map, the hero is always positioned as the last gate and acts as the last defense to your guild obstacle. When you have completed a map, your hero will gain experience points and skill points. The experience points level up your hero and improve its stats and its army stats. The skill points allow you to improve the stats for individual skill. (Tips: Improve the Cunning skill as much as possible. It will help in the later part of the game.) You will also gain tokens where you can use it to buy special items/inventory/armories etc.

Unlike many other games, this game is rendered in 2D view. But don’t be fooled by this, it has visually beautiful maps and well-animated characters. There won’t be any moment that you’ll feel the graphics is lacking.

If you like both TD and RPG type of game, then Defender Chronicles is definitely the one for you. The RPG elements set itself apart from other TD game. Not only is it the first of its kind, it is also the best. Be warned, this game is ADDICTIVE. Be prepared to spend hours after hours on this. There is even a community that discusses the strategy of this game. So if you have difficulties with any of the levels, remember to visit the forums for walkthough and strategy guides. 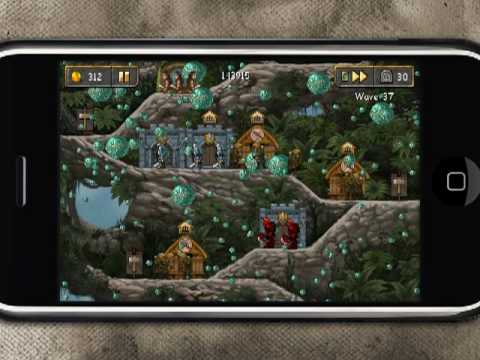 Defender Chronicles is currently available at the app store for $2.99 (originally $4.99) [iTunes link]

Friday Mobile Game Review is a new section that reviews mobile game (iPhone and Android) on a weekly basis. Game developers who are keen to get their games reviewed can submit your requests here.