Do you remember the BBS days? Well, I don’t, but I hear they were really something. Even though I was too young to understand computers at the time, I’ve since developed an affectionate nostalgia for old school computing. Imagining how digital artists of the early ’90s (and even in the present day) laboriously crafted character-by-character ASCII text art, as well as ANSI, blows my mind!

Today I’m going to show you how to turn your boring lines of text into exciting ASCII text art. We are going to use two programs, FIGlet and TOIlet. FIGlet has been around longer and is considered the classic program for automating the process of turning ordinary text into ASCII art. TOIlet is a fork of FIGlet that runs on the libcaca library and enables advanced features such as color.

Running FIGlet is easy. Just go to your command line and enter:

You can use this in your “~/.bashrc” or in a README for one of your software projects, or in any text file for any purpose. Just use your imagination!

The fun doesn’t end there. FIGlet has a great number of alternative fonts you can use just by adding the -f switch. The fonts are all stored in /usr/share/figlet, so you can pick and choose from there.

You can even pipe commands to FIGlet: 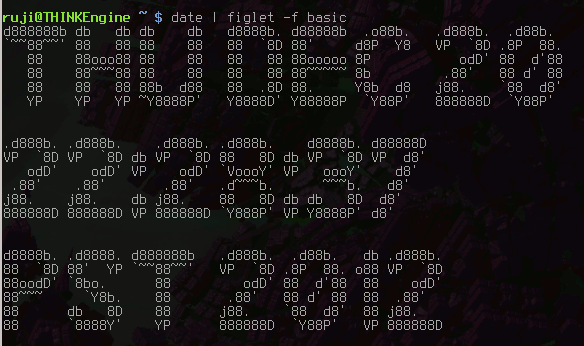 There’s more stuff you can do with FIGlet, including adjusting the kerning of your characters, but I won’t go into that in this brief introduction. See the main page if you’re interested.

Let’s Move On to TOIlet

I prefer TOIlet because of its cool color filters. You can use it in the same manner as you’d use FIGlet but with more options. For example:

The metal filter, as you can see, adds metallic shading to the output.

My personal favorite is the gay filter:

Enter toilet -F list to see all available filters (usually invoked via the -F flag). In my version of TOIlet, the following filters are available:

You can also export your output to the following formats using the -E flag:

If you’re an ASCII art nerd like I am, I strongly encourage you to download these two small programs and play around with them to make your own ASCII text art!

Ruji Chapnik is a freelance creator of miscellanea, including but not limited to text and images. She studied art at the University of California, Santa Cruz and writing at Portland State University. She went on to study Linux in her bedroom and also in various other people's bedrooms, crouched anti-ergonomically before abandoned Windows computers. Ruji currently lives in Portland, Oregon. You can find her experiments at rujic.net and her comics at dondepresso.rujic.net.

How to Fix the "No Installation Candidate" Problem in Ubuntu

How to Secure an SSH Server in Ubuntu

How to Change the Screen Resolution in Ubuntu

How to Find a Specific Word in a File on Linux

Why You Should Use Timeshift to Back Up Your Computer

How to Sync Linux Time With NTP Server

How to Develop Android Apps in Linux
What is Kali Linux and Do You Need It?
How to Host a Website in Ubuntu Using Tor
How to Install and Update Google Chrome in Ubuntu
The Ultimate Guide to Apt and Apt-Get Commands
How to Install Metasploit Framework on Ubuntu Linux
How to Improve Gaming Performance Using GameMode in Linux
How to Use the dig Command in Linux