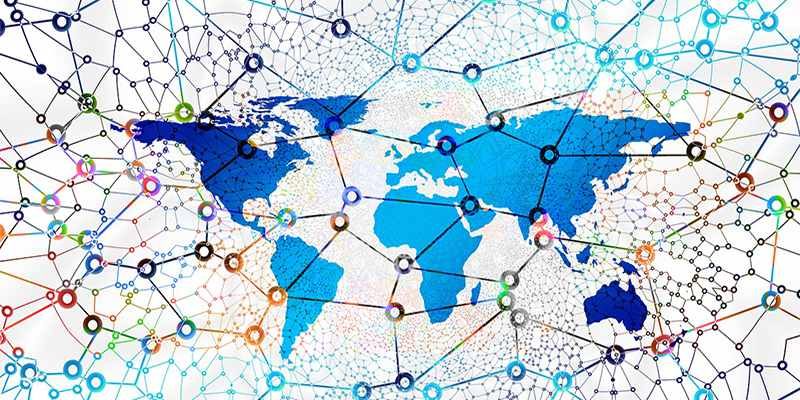 So, you’ve finally had enough of Facebook – privacy issues, time drains, relationship-straining political debates, and all the rest. Still, social media is a valuable tool, so what are your other options?

There are always Twitter and Google+, but if either of those appealed to you, you’d already be there. There are a few other options, though: social media sites that haven’t gotten much traction yet but that offer better privacy and more control and just might help you to partially fill that Facebook-shaped void in your life. 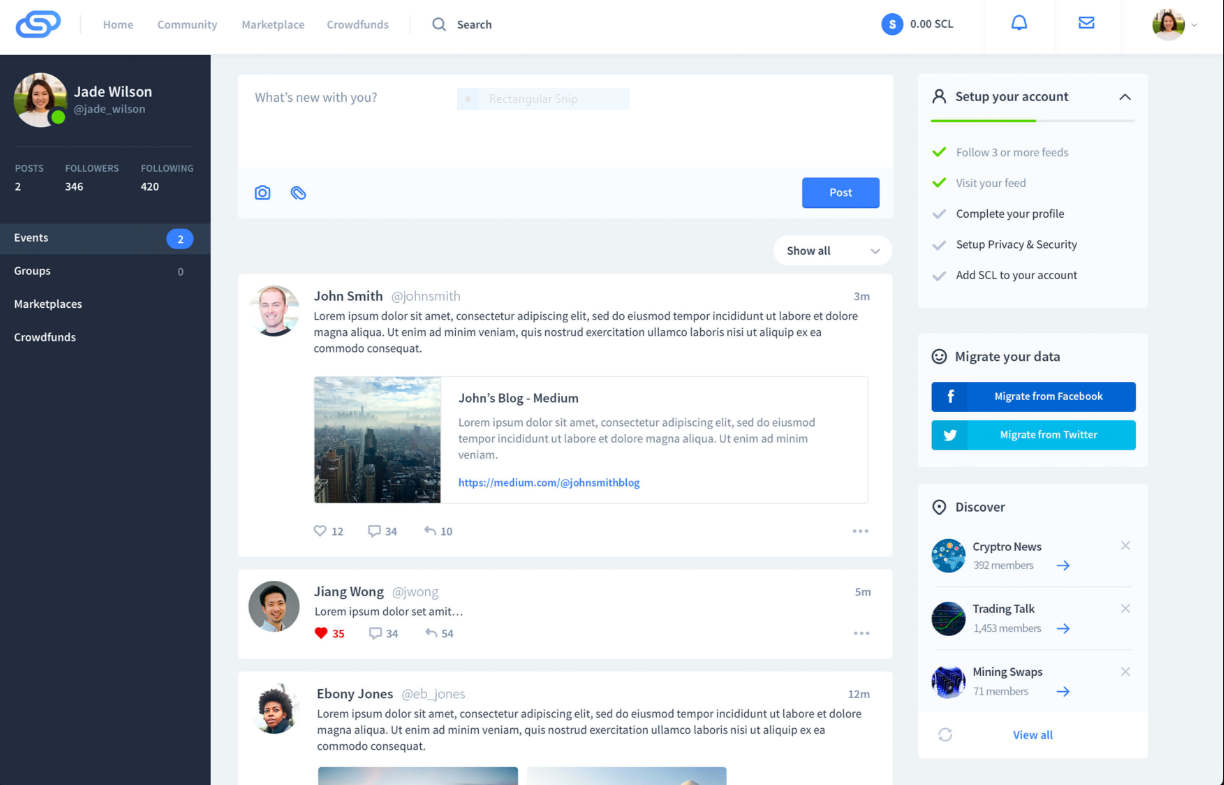 Sociall is a blockchain-based social network that values your privacy by scrambling data and not selling it off to dubious third-party groups.

All data in Sociall is decentralised, so it’s much less likely that the information you enter into it will be tracked by web crawlers. Sociall is monetised by its own cryptocurrency called SCL, which you can use to buy various bonus features. It’s based on the well-known Ethereum blockchain, so you can be sure that nothing dodgy is going on.

Other than that, Sociall functions very much like Facebook, offering user-to-user messaging (with extras like sending voice recordings), public wall posts, and options to organise social events and gatherings. 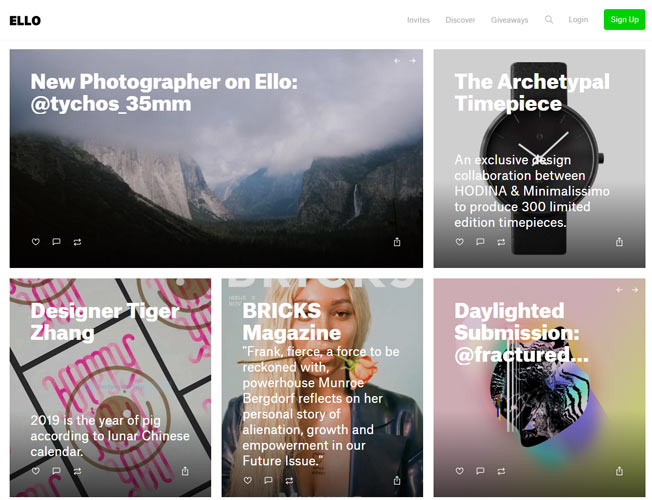 If you work in any kind of creative field – illustration, graphic design, film, you-name-it – or just want to hang out and share content in a space designed around tasteful images and art, then you should try out Ello. It wasn’t always like this, with the social network that used to called itself a “Facebook Killer” reeling in its ambitions to something more focused and tenable.

It was a great call, as it turns out, as Ello has grown from a somewhat sparse social network into a buzzing online creative hub, image-led and filled with artists sharing their work free of selfies, political mudslinging, and family photos. Think of it as a high-brow twist on Instagram. 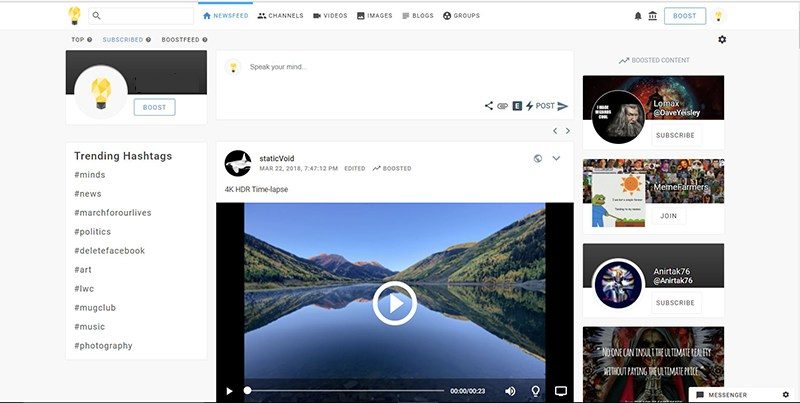 Minds does a little bit of everything, and its open-source, privacy-oriented, community-owned platform has actually attracted quite a few users. It has most of the standard Facebook features – profiles, timelines, media sharing, messaging, etc. But it also has hints of Reddit and Medium.com, with its content curation features and emphasis on original blogging content (which can be monetized using the site’s cryptocurrency tools).

Its open-source code, encrypted messages, and zero-censorship policy make it a great place for anyone with slightly above-average tech skills, though these features also make it attractive to extremist groups (alt-right, techno-anarchist, etc.) who have found themselves exiled from Facebook or Twitter. 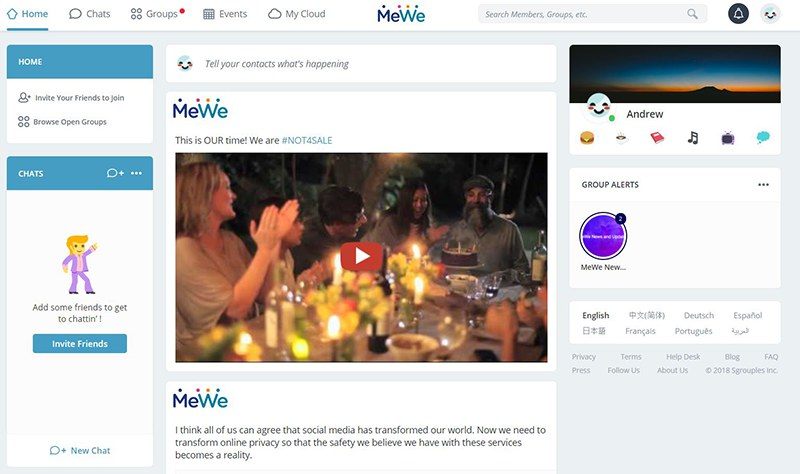 MeWe hasn’t gotten quite the coverage it deserves, especially given that Tim Berners-Lee, one of the primary architects of the World Wide Web, sits on its board of advisors. Its interface is simple and intuitive, it covers all the Facebook basics, and it is dedicated to maintaining user privacy. It has advertising, but it is not targeted. They compensate for lower ad revenue by selling add-on services, like voice messaging and message encryption. It’s quite user-friendly, and you may be able to connect your Facebook and Twitter to it, though if this feature currently exists, it’s somewhat well-hidden.

Related: 5 of the Best Alternative Facebook Apps for Android 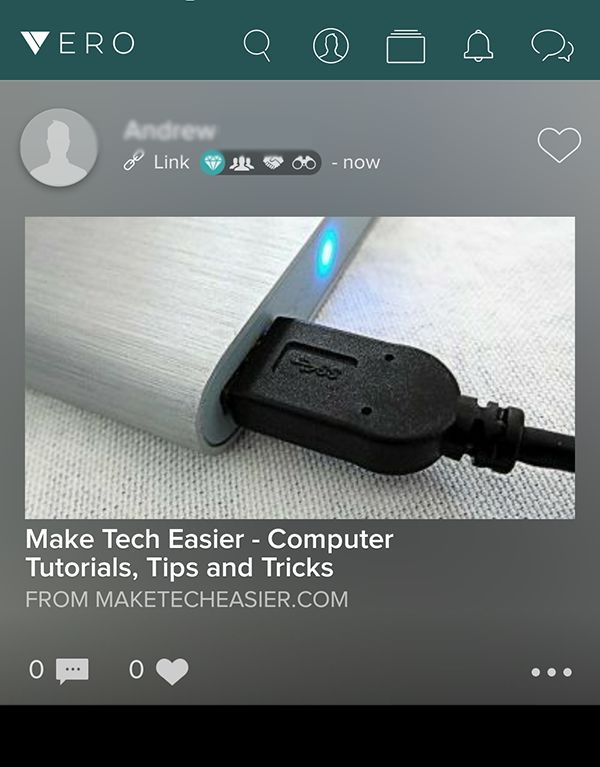 In March 2018 Vero jumped from 150,000 users to over 3,000,000 in the wake of Facebook’s Cambridge Analytica data breach. The mobile-only platform is well-designed and has some great photo management tools, which may have led to the overall alternative/artistic vibe given off by the current user base. Their privacy policy is not as strong as some others, but they do give users plenty of control and eventually plan to charge a subscription fee in order to avoid advertising, though early adopters will get a free lifetime membership. The mobile-only platform and eventual need to pay for the service may turn some off, but Vero certainly shows some potential. 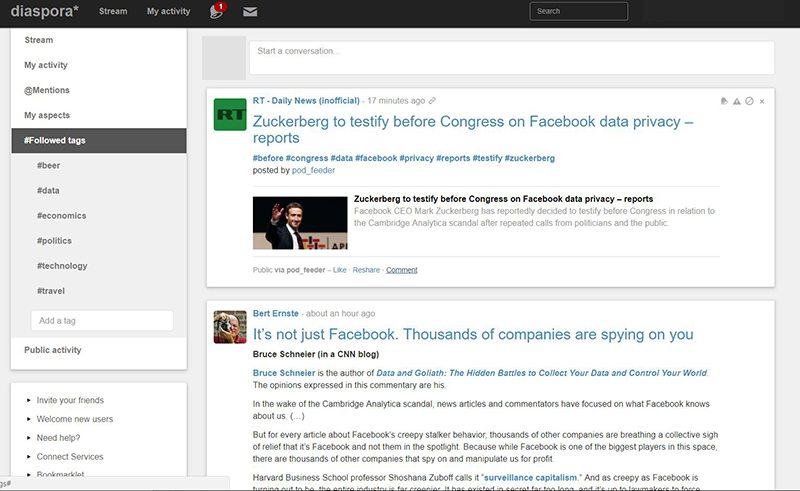 This is one of the oldest Facebook alternatives out there and also one of the most unique in terms of its setup. Rather than being owned by a single company, the open-source Diaspora software can be run by anyone who wants to set up a server. Users can choose which “pod” they want their account information to be stored on and set up an account there. Once their data is on that server, they can interact with any other user on the network, regardless of host location.

Diaspora has a pleasantly intuitive interface and supports cross-posting to other social networks, including Facebook and Twitter. Unfortunately, their decentralization means that app development has been slow, which is a downside for mobile users.

Realistically, Facebook has the advantage of scale – everyone is on it, and it’s not going to be easy to get enough people to switch over to a new network to make it a viable alternative. Networks that focus on niche communities may have better luck, but for average users, the best option is probably to pick a network that appeals to you, join up, explore, and cross-post with your regular social media. Like it or not, Facebook and Twitter are dominant, and any serious competitor is going to have to integrate with them to at least some degree to make switching a softer move for the users.