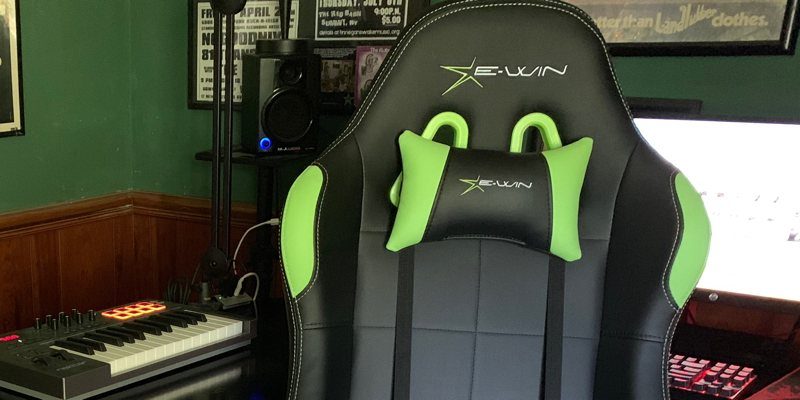 If you’re going to spend a lot of time in a chair, it better be a good chair. Part of this is about comfort, but it’s also about health. Sitting may not be as good for you as spending your day on a treadmill, but there are still different levels of sitting.

Gaming chairs are for more than gaming, and it seems that Ewin is out to prove that. In taking a look at the Ewin Calling Series gaming chair, I realized just how much I had been missing with my standard office chair.

The box that the Ewin Calling Series was packed in is large and on the heavy side. I was surprised to find the package on my doorstep, as I’d assumed something that big would have had the FedEx truck idling out front for a while. Despite the size, I had no problem moving the box into my office. Depending on the layout of your home, you may want to enlist someone for help.

Not only were the tools I needed to put the chair together included, but also, a pair of gloves to protect your hands during assembly. I wasn’t sure if they were necessary, but I put them on just in case. You’re not getting a spare set of work gloves here, but they made it through the assembly process just fine.

The manual seems like it covers a few different chairs but guided me through the assembly easily. One brief snag I encountered was that a small bag holding a few bolts was hidden in another bag. For a time during the process, I thought I was missing a piece. Fortunately, I found the bag with the extra bolts right after.

Overall, putting the chair together was easy. There were even a few sections in the manual I was able to skip, as they were already assembled out of the box. While you may need help moving the box, you should be able to assemble the chair alone.

The design of the Ewin Calling Series gaming chair is flashy, as you’ll often find with this type of chair. That said, it’s far from over the top. The color highlights are subtle, but if this isn’t your preference, you can also get the chair in all-black for a classic look.

Ewin has a style of its own, so you’ll notice a consistent look across its various series of gaming chairs. If you’re actively put off by the look of one chair, you may not like other models either. Even so, many gaming chairs have a similar look, so if it’s not for you, you just may not be a fan of gaming chairs in general.

Fortunately, the Ewin Calling Series doesn’t sacrifice comfort for flash. We’ll look at that more in depth a little later on in this article.

The chair I used before this was a well-regarded model from a known brand. That chair did its job well, but when it comes to build quality, the Ewin Calling Series is much better. This is both in terms of overall build and in the apparent quality of the materials used.

Other chairs I’ve used have had squeaky parts and weak-feeling sections out of the box. The Ewin Calling Series gaming chair has no such thing. I’ve often had to re-tighten other chairs within a day or two of putting them together but have not had to do that yet with this chair.

This is starting to cross over into the overall comfort, which we’ll look at next, but this chair is very adjustable. You can adjust the overall tilt of the back, as well as the overall height, seat pitch, and armrest height. None of these adjustable sections feels weak or like something you don’t want to over-stress.

The Ewin Calling Series gaming chair is quite adjustable, and because of that, it takes some getting used to. You may find that what you initially think is a comfortable position doesn’t stay that way. This isn’t a fault of the chair – instead, you simply need to take a little time to figure out what works for you.

Initially, I sat fairly upright, as I do in other chairs. This was comfortable enough, but after a while, I found that a more reclined position was much more comfortable. This proved true even for working at my desk, which I had initially thought wouldn’t work.

This chair also includes two pillows: one lumbar support and one neck pillow. You may be tempted to take these off at first, but I found they made the gaming chair much more comfortable. The lumbar pillow is essential, and while the neck pillow may seem superfluous if you’re sitting bolt-upright, it’s very handy if you recline.

I was fortunate enough to receive the chair heading into a weekend, so I set it up on Saturday morning and spent a fair amount of time gaming and watching videos. The chair not only kept me comfortable, but the more I used it, the less I wanted to go anywhere else.

For working I alternate between standing and sitting. The Ewin Calling Series gaming chair challenged my willpower when it came time to stand back up. Depending on who you are, this may not be a good thing, but I look at it as a positive.

Compared to the chairs you’ll find at your local office supply store, the Ewin Calling Series gaming chair isn’t cheap. That said, after only a few days of testing, I was pretty sure it was worth the list price. Another day or two later, I was certain.

The Ewin Calling Series gaming chair lists for less than $400, but it’s frequently on sale, so you may not even have to pay that price. Check the website for current pricing, but regardless of sale price, it’s a great value.

Before this review I was skeptical of gaming chairs. I’d tried a few other, cheaper models and didn’t see the point. After trying the Ewin Calling Series, I can’t imagine spending a workday or weekend game marathon in anything else.