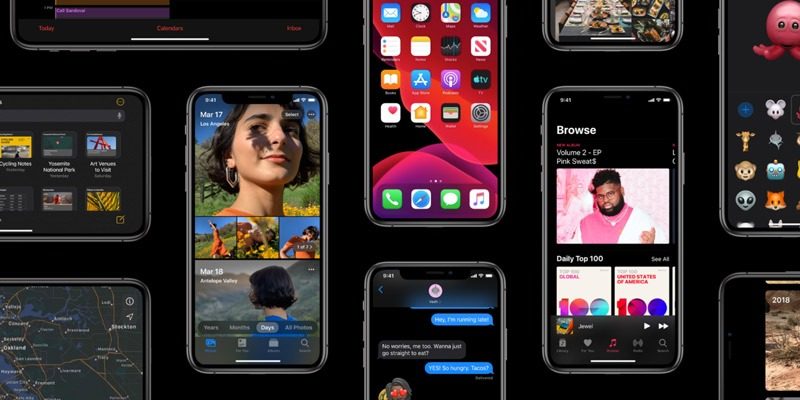 Apple introduced its latest iteration of iOS alongside macOS Catalina and other products this June at its keynote event at the Worldwide Developers Conference 2019. iOS 13 brings a lot of changes and upgrades for iOS devices. We’ve highlighted the major changes in iOS 13 below, so have a look.

Arguably the most prominent design update in iOS 13 is the new Dark Mode. Similar to the Dark Mode offered on macOS, this changes the look of the entire operating system from light to dark. You can choose to use Dark Mode all the time, or schedule it to turn on during night / sunset or any custom time. Currently all native Apple apps will support Dark Mode by default in iOS 13, while third-party developers will be offering this mode through an update.

With iOS 13, Apple has introduced a separate operating system for the iPad, known as iPadOS. iPadOS is a dedicated OS allowing for improved iPad workflow and better performance. The home screen has been redesigned, allowing for widgets to be pinned on the left side of the screen. This is similar to the left-mode screen found on the iPhone. iPadOS combines these two screens for a better workflow.

Find out more about iPadOS here.

Every successive iOS updates brings faster and more efficient performances with it. Apple claims that app-launch times are two times faster, while Apple update and download times have been reduced by up to 50 percent. Similarly, Face ID, which unlocks your iPhone using your front camera on Apple’s latest devices, is now 30 percent faster than before. Older iPhones also have the same speed improvements, which is a great added bonus, since older devices usually slowed down with iOS updates.

Apple has introduced a revamped Photos app which brings a new feature that intelligently organizes your entire library according to day, month or year. This makes it easier to browse and relive through your favorite memories. Some basic additions to the Portrait mode in the Camera app have also been introduced, allowing you to make portrait lighting adjustments to vary the light distance from the subject. This allows you to create a customized look depending on what you’re going for. Whilst editing photos, you can also handily view a before-and-after version of the photo, to see exactly what difference your effects make on a photo.

A major issue encountered by videographers was the lack of basic editing tools for videos in iOS. iOS 13 now allows you to at least rotate, crop and apply filters to videos.

Reminders also received an overhaul in iOS 13. The new app design features color-coded sections for Today, Scheduled, All and Flagged categories, which allows for a better analysis of your tasks. When using the app, the keyboard also features a Quick toolbar that acts as a shortcut to quickly add times, dates, locations, flags, photos and scanned documents.

Apple has also introduced updates to Siri, Memoji and Messages, which allow for greater utility and functionality.

Apple has introduced a new “Find My” app, similar to what was introduced in macOS Catalina. The new app basically combines the Find My Friends and Find My iPhone apps, allowing you to both locate your own devices and your friends with a faster interface.

Similarly, if you’re trying to locate a device which isn’t connected to Wi-Fi or cellular, Find My will use a crowd-sourced encrypted Bluetooth signal to locate it.

iOS 13 brings some updates to the Maps app. Junction View has been introduced, which is designed to help users avoid wrong turns. Transit schedules and flight information has also been added to the app.

The Look Around feature is the main new addition to the app which is equivalent to Google’s Street View. Look Around offers a street-level view of what’s around you. It can be accessed by clicking a binoculars icon on screen whenever available.

A new and noteworthy privacy change in iOS 13 is a new sign-in option to bypass Google and Facebook, known as Sign in with Apple. This new feature allows you to log in to any app that requires identification with an anonymous random email created by Apple, which forwards to your real email. Thus you can protect your personal data from being sent to any third-party apps you have privacy concerns about.

The feature sounds really good, but we’ll have to try it out to make sure it works as its intended. Apple has also increased privacy protections in iOS 13. You will get background tracking alerts for apps that might be recording your location without your knowledge.

For the full list of features, be sure to head over to Apple’s website for everything new added in iOS 13.

Nearly all iOS devices released during the past four years will support iOS 13. Here is the list of supported devices:

If you have an older device, you’ll be stuck with iOS 12 until you upgrade.

iOS 13 will officially release this fall, but its most likely to launch in mid-September after all the bugs have been worked out. This will most probably follow the expected iPhone release event in September. Currently, the iOS 13 public beta program is available for anyone who wants to get an early look.

Were there any feature you found special and much-needed in the iOS 13 update? Let us know in the comments section below.

How to Transfer Voice Notes from iPhone
How to Back Up Your Whatsapp Chats in iOS
How to Set Live Wallpapers on an iPhone
How to Add a Trusted Phone Number to Your Apple ID
Apple Pay Not Working? Here’s How to Fix It
Syncing macOS and iOS: How Do They Connect?
Last Minute Gift Ideas for iPhone and iPad Users
How to Disable Auto Brightness in iOS