There are a great number of Linux users who dual boot their computer with Windows. And in situation like this, one has to make different partitions to separate Windows and Linux partition. Windows usually (not always) uses NTFS file format while Linux is usually (again, not always) installed in Ext3 or Ext4 file format. While using Linux, one has to manually mount the drives. It doesn’t take time in mounting but in some situation you might prefer to have it automatically mounted at each start-up for e.g., if your Music files are on the NTFS partition and you want to use the same directory in Linux it is advisable to auto mount that drive. In this tutorial I will show you the easiest way to mount Windows NTFS partition at each start-up.

One way to automount NTFS drive is by editing fstab, but that might not be simple for beginner Linux users. An alternative way is to use a GUI tool named ntfs-config.

Open the terminal ( Ctrl+Alt+T ) and use the following command to install the tool:

Alternatively, you can install it from Ubuntu Software Center.

Before using, we need to tweak the tool a bit as there is a known bug which stops the tool from working properly. It looks for a directory which needs to be created. In the terminal, use the following command to create the mentioned directory:

Now we are ready to use the ntfs-config tool. Launch ntfs-config. Remember, it needs administrative rights to run the tool. When you start the tool, it lists all the partitions that are available on your computer. The interface looks like this: 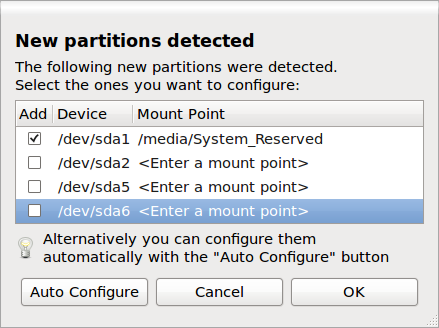 As shown in the picture above, there are three NTFS drives present on my computer. Check the box adjacent to the drive you want to automount. In the place for <Enter a mount point> you can put the name which you want to use for that particular drive for e.g., windows1.

If you want all of your NTFS partition to be automounted, just click on “Auto Configure” and it will take care of the rest of the stuff.

By the way, in case you do not know which drive is numbered what (i.e. /dev/sdaX which is not similar to Windows naming convention of drives), you can use the following command in terminal to find it out.

In the output, look for the column Blocks. This gives the size of the partition in bytes. In the example above, 102398278 bytes can roughly be estimated as 102 GB.

Once you select the mount point, it gives you option of enabling write support for the drives. Its up to you if you want this feature. 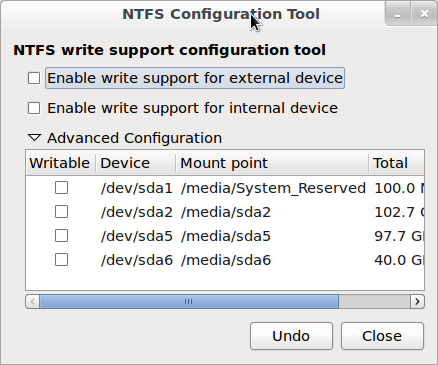 Save and close and you are done with a reboot. You will find your drive(s) automatically mounted at the start-up.

Your questions and suggestions are always welcomed. Do not forget to subscribe to the site for more helpful article to make your tech-life easier. Cheers :)