After all the buzzes in the blogosphere, I am sure you have already heard the rage created by Google Wave. If you have not have the chance to give it a try, here’s your chance now. We have 25 invites to give away to MakeTechEasier readers.

For those who have absolutely no idea what Google Wave is, it is mainly a web application and computing platform designed to bring together e-mail, instant messaging, wiki, and social networking, with a strong collaborative focus, mixed with spellchecker and translator extensions, which are able to work in concert, in real-time.

To get a more detail understanding of what Google Wave is, check out our very own Google Wave guide (part 1 and part 2)

Enough said. Let’s get down to business!

How to get your Google Wave invite? 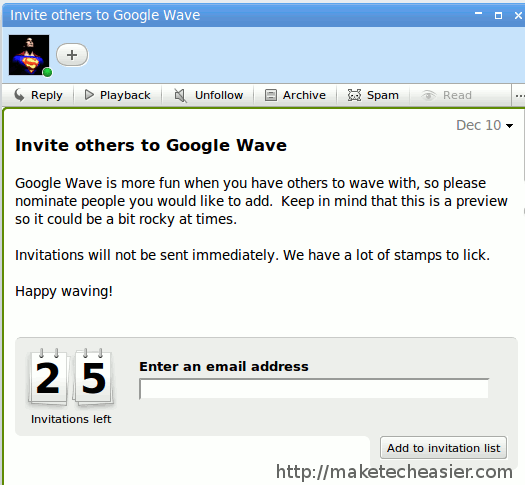 To get your Google wave invite, simply leave a comment at the end of this post, stating two things:

1. Idea for a topic that you would like us to write about

2. An improvement/extra feature that you hope to see in MakeTechEasier

You have until Friday (18th Dec 2009) to leave your comments. We’ll randomly pick 25 people from the comments list, and announce the winners on Sunday 20th Dec 2009.

Note: If your comment does not appear immediately, do not re-submit. It might just be sitting in the queue. Double entry will not double your chance of getting a wave invite. :)

Update: This event has now ended. We will soon announce the winner shortly.

Update: I am glad to announce that all those who have left their comments here will receive their Google wave invite. Thanks for all your supports and contributions.