Do you have machines that are doubling up as paper weights because they can’t keep up with the hardware demands of modern distros? Here’s all the low-down on the most popular tailor-made distros for old computers that’re past their prime.

Defining hardware as “older” is tricky. Newer resource hungry software levering on the pace of hardware developments is rendering even relatively newer hardware obsolete. Examples of these relatively recent “older” hardware would be single-core or dual-core AMD Athlons and Intel Pentiums.

Then there are also those that still have truly ancient peripherals that are no longer supported by the latest Kernel releases, such as dial-up modems.

The good thing about the Linux community is that there’s no dearth of projects that bring together the various light-weight apps and package them in a distribution that uses the meagre hardware resources judiciously.

My favourite distro for fusing life into any computer is Puppy Linux. The distro uses one of the lightest window managers (JWM) and though it might not be pretty to look at, it’ll turn that old lethargic work horse into a galloping steed.

Another reason why I love Puppy is its collection of software and custom apps. It has graphics apps, productivity apps, apps to playback, edit and even create multimedia. Using its custom apps, you can block website ads, grab podcasts, do internet telephony, burn optical media, and a lot more. 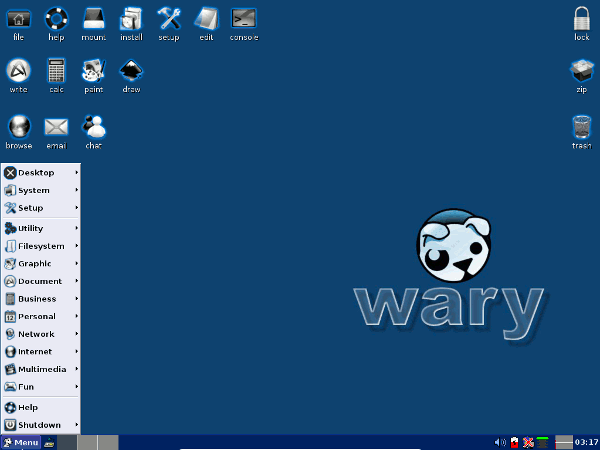 The distro is available in different flavours. The WaryPuppy edition uses an older kernel and includes additional drivers to support peripherals like dial-up modems. There’s also RacyPuppy which uses a newer kernel.

I’m also impressed by Puppy support infrastructure. It has two independent and very active forum boards, and loads of documentation on getting started. The distro also bundles help documentation on several topics such as on working with Microsoft Office documents.

The weakest part of the distro is its installer which doesn’t have an automatic partitioner and instead fires up Gparted for you to manually partition the disk. That said, each step in the installer is very well documented within the installer itself.

Unlike Puppy’s everything-but-the-kitchen-sink approach, some light-weight distros ship with limited apps and instead let you build your distro as per your requirements.

Tiny Core Linux bundles a terminal, a text editor, and an app launcher on top of the light-weight FLWM window manager. If you need anything else, you’ll have to pull it in using the distro’s package manager, including the installer if you want to install Tiny Core on to your hard disk.

Due to its minuscule size, Tiny Core Linux boots up in a blitz. But the distro’s stellar performance comes at the price of usability. The distro does take some getting used to. For starters, you’ll be spending quite a lot of time with its package manager, which isn’t the most intuitive in the business.

You have to put in some time browsing through its installation guide and reading through the FAQ, its expansive Wiki and forum boards to make the distro work for you. Once you get the hang of it though, you’ll appreciate its flexibility. 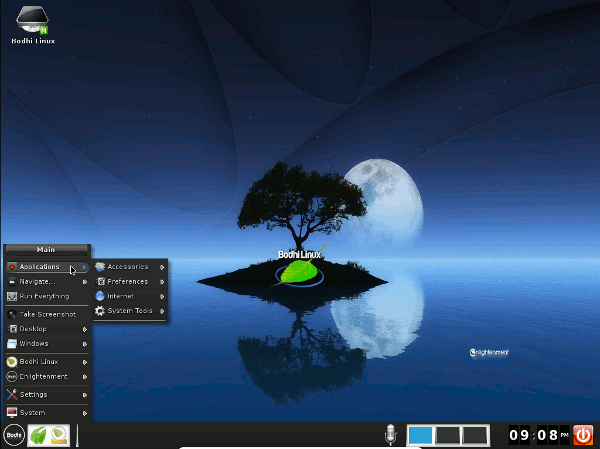 Just like Tiny Core Linux, Bodhi Linux ships with a minimum number of components, such as the Leafpad text editor, and the PCMan file manager. For anything else, fire up the included Midori web browser and head to Bodhi’s innovative online software centre.

Bodhi has a number of profiles, from Bare, Laptop to Compositing and Fancy, each of which is optimized for different types of hardware. The distro uses the lightweight yet pleasing Enlightenment window manager which makes this minimal simple-to-use distro easy on the eyes.

In my experience, Bodhi requires at least 512MB of RAM for decent performance.

Although its developers claim that it isn’t primarily designed for old systems, the CrunchBang distro is a good option for system with limited resources. It works well on older machines, and can be easily fleshed out for relatively newer ones. 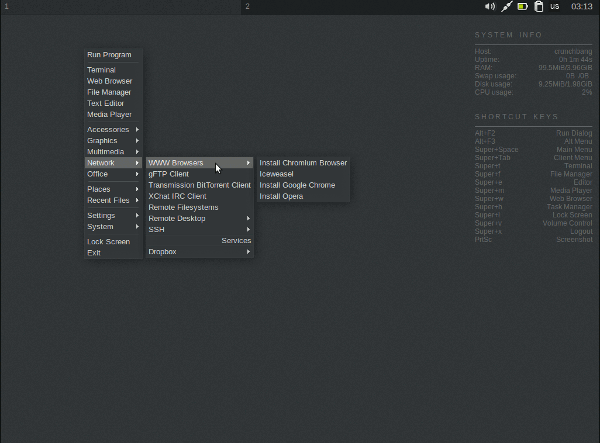 CrunchBang is a Debian-based distro which uses the light-weight Openbox window manager and ships with Gnome Mplayer, Gimp, and the VLC media player. Although the distro ships with the light-weight AbiWord and Gnumeric, it has scripts to install LibreOffice and Dropbox.

Another Debian-based distro is antiX. It’s based on Debian Testing and has a relatively newer kernel compared to other distros with a similar purpose. 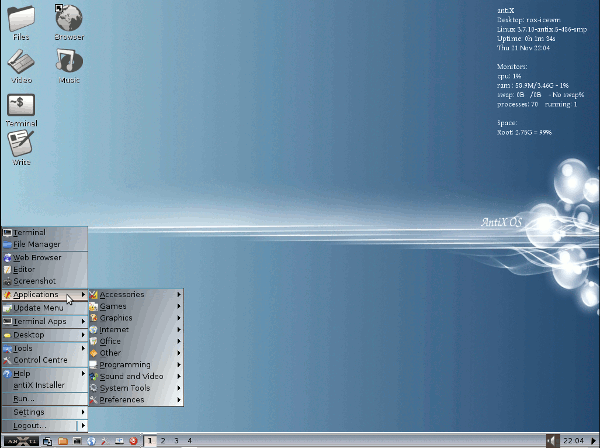 The distro comes with the Fluxbox window manager and a host of custom tools to manage the desktop such as the antiX Control Center. The distro also has a custom package manager and a fairly straightforward custom installer.

There are quite a few distros wrapped around the LXDE desktop, including Lubuntu, Linux Mint LXDE and WattOS. LXDE is a simple desktop environment with a clean interface. It strikes a good balance between being lightweight and functional which is probably why it’s the most popular desktop of the puny Raspberry Pi.

There’s also the light-edition of Vector Linux based on LXDE. SliTaz and DamnSmallLinux.

Depending on the age of your hardware, you can revive it with a number of distros I’ve listed above. Some like CrunchBang and antiX are ideal for machines that have a single core or less than 1GB of RAM, while distros like Tiny Core and Puppy will work on even decade old machines.

When you are resuscitating older hardware, be prepared to sacrifice some of the features of modern distros like compositing effects and conveniences like full-fledged office suites and image editors.

You’ll also need to find a balance between performance and usability. Some distros like Tiny Cire are snappy on dated hardware but come with a steep learning curve, while other like CrunchBang might not work on really old hardware.

If you’ve used any of these distros (or any other) on an older machine, please share your experience in the comments below.