You probably know which are the most used audio formats across the Web, but do you know the differences between them, or how are they produced? And have you ever thought on which format is more suitable for your needs?

The differences between Analog and Digitial sound

Even though man has the ability and the means to record sound, that record will never be an exact representation of the original sound.

The following image shows the waveform for analog and digital sound wave. As can be seen, the analog sound wave (1) is rather different from the digital one (2). 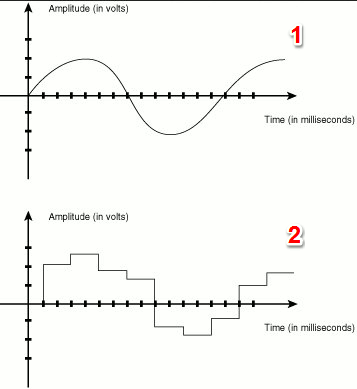 The analog waveform is continuous and have successive crests and troughs that represent highs and lows of our voice whereas a digital waveform is like a barchart where the highs and lows are represented as number. The quality of a digital sound wave is often linked to its “sampling” rate. CD has a quality of 44100 samples per second (44.1 KHz), which is a quite good representation for our ears.

There are two different kinds of digital audio file formats – the lossless and the lossy. As the name suggests, the lossless file is made without any losses relatively to the original tracks. For example, when you rip an audio CD to your hard drive in lossless format, the files you get are the exact same tracks contained within the CD. However, if you select the lossy format, some information that is unnecessary for the listener, such as sounds that we cannot hear, are discarded.

Lossless formats include WAVs, FLACs, AIFF, and Apple Lossless. Inside this group, the first two are probably the better-knowns.

Inside the lossy formats, other than the popular MP3, we still have WMA, AAC, MP2 and OGG. The main difference between these formats is the multiple encodings technology used.

There is still another thing to consider: whether the format has a variable (VBR) or constant bitrate (CBR). Some formats have variable bitrates, since they use higher bitrates for complex segments of the file, and lower for the other segments. VBR formats have a better quality-to-space ratio, compared to CBR ones. Even inside each format, there are different kinds of bitrates. For example, MP3 is usually found in V0 (~245 kbps), V2 (~190 kbps) and 320 kbps.

If you have noticed, FLAC files are usually much bigger than the MP3 ones (usually about 10 times bigger). This is because their bitrate is higher. “Bitrate” is the amount of information processed per second whenever you play a file. So, the higher the bitrate, the higher amount of information will be processed and the better sound quality will be presented (the same happens for images and photos). In this case, a sound file created with a higher bitrate (such as FLAC) will be bigger in size than a sound file with lower bitrate (such as MP3). 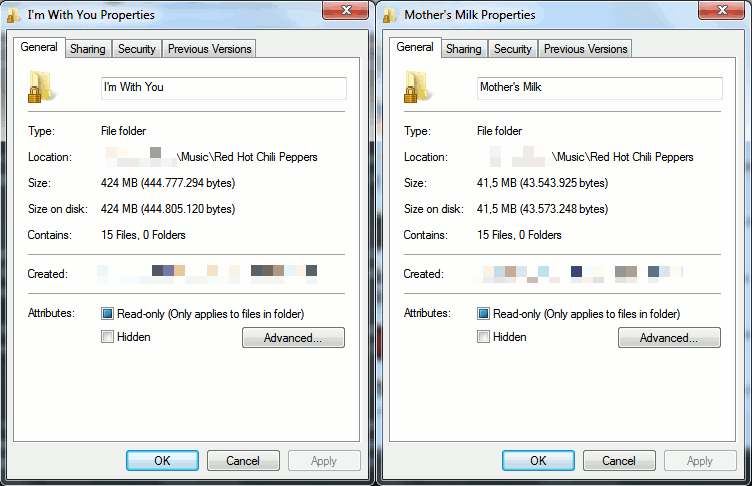 In the above image, I compare 2 folders from my music collection: the first is a FLAC album, the second is an MP3 (128 kbps), and they have, respectively, 14 and 13 songs plus the album cover. As you can see, the FLAC album is much bigger in size than the MP3 one. Lossless formats such as FLAC give a better music quality, but they take up much more space than the lossy ones.

Which audio format is suitable for you?

There are many factors that can affect which format you should choose for your music:

For MP3, the 320 kbps files are really the better ones, but again a regular person won’t tell the difference between those and the V0 ones. A regular V0 album with about 15 songs is about 65 MB in size, so I personally believe that V0 (VBR, if possible) really is the best quality-to-space ratio option for your music collection.

Is this article helpful? Let us know in the comment.

HEIF – A New Image Format to Replace Them All [Technology Explained]
The Difference Between MP3, AAC, FLAC and Other Audio Formats
How Does Audio Compression Work, and What Is “Lossless” Audio?
MTE Explains: OpenType or TrueType, Which Should You Use?
MTE Explains: Common Word Processor File Formats
MTE Explains: ID3 Tagging on Music
What You Need to Know About Video Encoding