Linux and Mac both come with workspaces that allow you to organize your applications and workflow in different desktop. For Windows, if you have your hands full with tons of different applications to open and work with and you need a better way to expand the screen without having to get a bigger monitor, Desktop Panorama may be the solution for you.

Similar in concept to the virtual desktop, but implemented in a different way, Desktop Panorama creates a virtual panorama stripe that appears just above your taskbar and it shows you a miniature representation of all the open windows in your desktop. 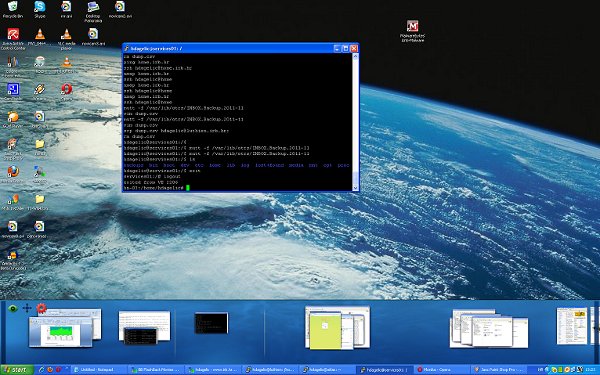 With Desktop Panorama, you can move your application windows outside the desktop into different areas (in the stripe) and zoom into that view later on. Essentially, you have a desktop that extends much further than your screen reaches. As you drag a placeholder across the bar, you can switch over to another view.

The system I used for this is your run-of-the-mill modern desktop PC, running on an Intel Core i5-650 CPU and 8 GB DDR3 RAM. We’ll also be testing it on another desktop PC with an i3 CPU and 4 GB of DDR3 RAM. Both computers run Windows 7 x64 Ultimate. Added to this, we’ll throw a laptop into the mix, running Windows 7 x86 (32-bit) with an old Intel Core2Duo CPU and 2 GB DDR RAM.

If any issues show up on any of the aforementioned computers, I’ll point it out. Let’s get our hands dirty!

The installation was a breeze. There are two versions you can download: The free version and a $5 full version that lets you switch desktop views. With the free version, you can only move windows out of the desktop’s current view, but you can’t switch over to a new one. The video below shows you how desktop views work:

There was no third-party software involved in the installation. It was clean and simple. You can really click “Next” on this without giving it a second thought. It was fast and simple.

I was greeted by a number of different screens that showed me how to use the software. It quickly explained what all the buttons do and how I can actually switch views.

It’s a decent interface quite different from what I saw in the video I showed you above.

That’s how the left side of the bar looks like. I’m surprised that it supports a 16:9 (widescreen) aspect ratio, considering that the demonstration video was done in a 4:3 (traditional) ratio. Its preservation of screen real-estate is achieved by appearing only when the lower right-hand side of the screen is approached by the cursor. On the negative side, this could be annoying if you use the little “show desktop” button on the same corner, although the effect is mostly negligible.

Moving a window from one part of the display to another was simple and smooth on all systems. Below you can see my Skype window out of the current view.

By dragging it back in from the bar, you can make it re-enter the current view again. Alternatively, you can drag the rectangle that encompasses the current view onto the Skype window, bringing it into focus. Interestingly enough, the taskbar icon for the Skype window appears and disappears as I drag it in and out of the view. This also happens as I drag the view onto and away from it. The effect is very important if you want a full-fledged virtual desktop.

So, there you have it. It’s a very simple piece of software, but it works!

Perhaps my biggest pet peeve is the fact that the software doesn’t let you change the view in the free version. This takes away its essence as a virtual desktop and severely limits its usability. Added to this, it also shows you a pop-up window asking you to activate it every now and then.

But $5 isn’t much to purchase a license, and it’s well-worth the money considering the added functionality it gives you.

On a scale of 1 to 10, I give this an 8.5. Despite the understandable motivation for not giving the software its full functionality in the free version, it’s still rather disappointing. Other than that, you get a great value for the money you’d pay to get the full working copy.

If you ever try the software, be sure to let other readers know what you’ve experienced. Leave a comment below to let us know what you think!