If you ask any experts on tips to speed up the performance of your Windows PC, the answer you often receive is “Defragment your hard disk“. The reason for hard disk fragmentation is because whenever you load any files or data into your hard drive, the operating system breaks it into uncountable number of pieces or chunks and store them in the empty spaces in the hard drive. When you try to open that file, the operating system has to gather all the parts and assemble them back to one piece. As more and more files are being split up and stored in various places, the hard disk become very crowded with fragmented parts and more time is needed to retrieve the files.

To fix this fragmentation problem, we need to run the disk defragmentation application where it locates the various parts of a file and arranges them in running order. By default, Windows comes with its own set of defragment tool that anyone can use, but it suffers from some drawbacks such as inability to defragment a single selected file and ignores files that are smaller than 64 MB.

On the other hand, there is this effective utility named Auslogics Disk Defrag which lets you overcome all of this drawbacks. This useful Auslogics product comes with features like:

How to use Auslogics Disk Defrag

One good thing about Auslogics Disk Defrag is that it is easy to use. 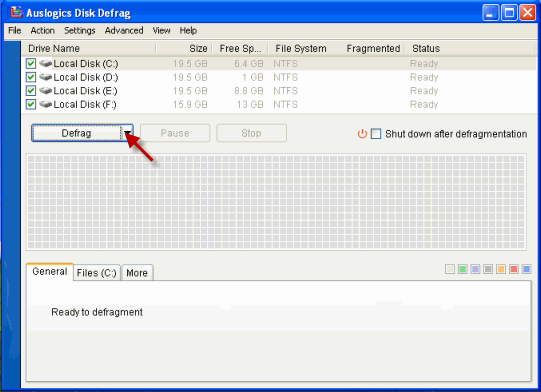 Clicking on the arrow beside the Defrag button allows you to change the algorithm of the defragmentation process. Here you can chose to just analyze the disks or to defragment the selected drives. You can also chose “Defrag & Optimize” option where it tweak the system for best performance. This process is slower but more effective than just the “Defrag” method. 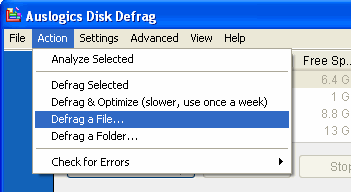 Another interesting feature about this software is that you can set the algorithm of the defragment process. One option is to remove the users’ temporary file before defragmentation. This can significantly reduce the defragmentation time. You can also set option not to defrag files bigger than a certain size. Moving the system file to the beginning of the disk can also help to increase your system speed. 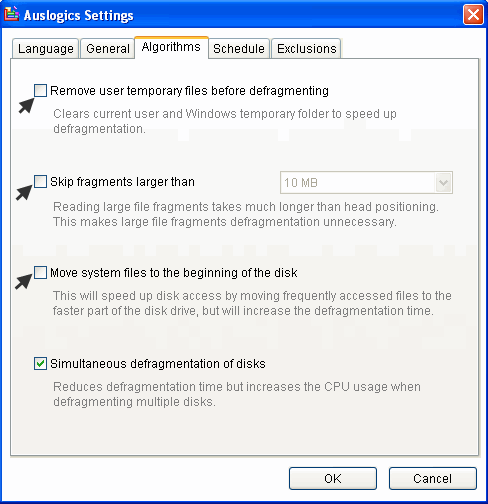 You can also schedule the defragmentation process from the “Schedule” tab.

Auslogics Disk Defrag is free to download and use. For those who wanted more powerful software, you can also try the premium version – Auslogics BoostSpeed.

Does this software make your defragmentation process a whole lot easier? Hopefully your PC performs faster too.