If you are like me, you’ve got your music all over the place – on cloud sharing services like Dropbox and Google Music as well as on local NAS drives. You can stream music from them to WiFi-enabled speakers that cost a bomb. Or, you can use the BubbleUPnP app and an old Android phone and convert any “dumb” speakers into smart ones.

For this project, you need a pair of HiFi speakers that you can connect to an old unused Android phone with the Auxiliary (AUX) audio cable. I have three sets of such speakers over my house – in the living room, in the bedroom and in the kitchen. 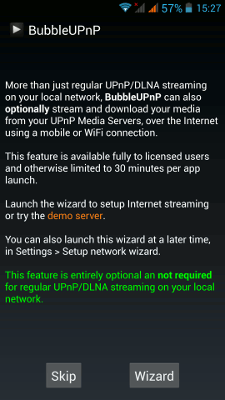 Note: BubbleUPnP by itself isn’t capable of playing any media. For that, the app relies on external media players. You’ll find several capable media players in the Google Play store. I personally prefer the MX Player, but BubbleUPnP can also hook up with MoboPlayer and DicePlayer.

Finally, you obviously need some music. The music can be on a cloud sharing service, on any device on the local network, or on the phones connected to the speakers.

The most interesting part of our setup is the BubbleUPnP app which will turn the Android phone into a DLNA-compatible device.

Interestingly, most modern WiFi routers are DLNA-certified and have a USB port. I use this port to connect a 1TB portable USB disk loaded with podcasts. So thanks to BubbleUPnP, I can stream the podcasts to any of the speakers around my house. Additionally, I can also stream music from the cloud services to any of the speakers. 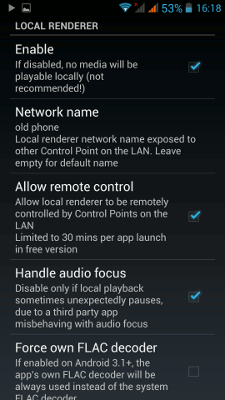 Even if your music just resides on the phones themselves, you can still do something very interesting with this setup. Since the phones are now DLNA-enabled devices, you can stream music on one phone to play on the other! So if you have music on the phone in your living room, you can listen it on the speakers in your bedroom, without moving an inch!

So let’s get cracking. First, let’s make ourselves some network-enabled speakers.

Install the BubbleUPnP app on the old Android device. When you launch BubbleUPnP for the first time, it’ll ask you to setup internet streaming to stream media to any device over the network. You can safely skip this step, since it isn’t required to stream media on the local network, which is what we want to do. 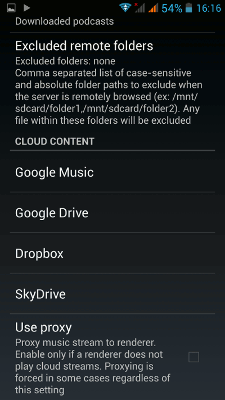 Once BubbleUPnP is installed, tap the menu button and go to “Settings”. Scroll down and tap on the “Local Renderer” option. Here make sure the “Allow remote control” option is enabled. Also, tap on the “Network name” option which brings up a text field where you can enter the name for the device, such as “living room” or “kitchen”. This is how this phone will appear to other devices.

Now setup the device to stream content from our cloud libraries. Again, tap the menu button and head to “Settings” and scroll down to the “Local Media Server” option. Scroll down to the bottom of the page where you’ll see a list of supported cloud services including Google Music, Google Drive, Dropbox, and Skydrive. Tap on any and enter your account authentication details for the service.

That’s all there’s to it! You can now connect the phone to the speakers via the auxiliary ports on both the speakers and the phone. Repeat this procedure on all the Android phones and place them in different room around your house.

Set up the remote control

To control playback on the Android phones connected to the speakers, you’ll need to install the free BubbleUPnP app on your regular everyday use Android phone. When you launch the app on this device, skip the Internet streaming wizard and head straight to the “Devices” tab. 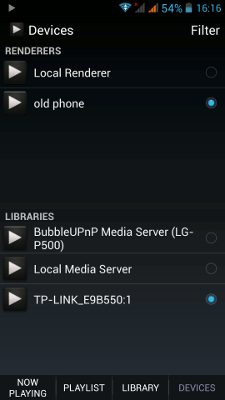 First select the speakers that will play the music. To do so, in the list of “Renderers”, select the name of any of the old Android phones hooked to the speakers.

Now select the music you wish to stream. To browse music on either the NAS device or the Cloud service, select the appropriate location from under the list of “Libraries”.

So for example, in BubbleUPnP in the controller device, if you select your router from under “Libraries” and the old phone attached to the speakers under “Renderers”, the app will let you browse the media on the NAS device which will then stream to the remote speakers!

When it’s all up and running, you’ll be able to use your controller phone to playback music from any DLNA device on the network to any other DLNA device. So you can listen to the same podcast in your kitchen as well as your living room.

Now that’s a music streaming setup worth bragging about.