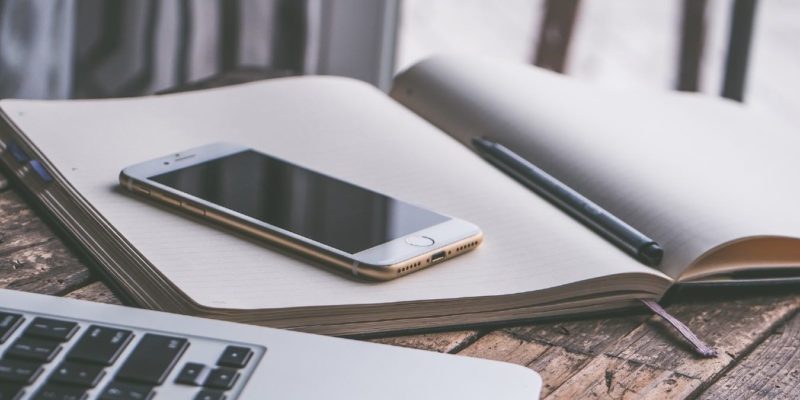 With the release of iOS 13 and macOS Catalina, Apple’s beloved Reminders app received one of its biggest updates. From a visual refresh to new features, this update marks a big step forward for one of the company’s most popular default apps. Among those new features is one that is bound to win over both fans and new users alike.

Nested to-dos might not sound like a big deal right off the bat, but once you try them, you’ll never go back. However, getting started with this implementation isn’t easy, so let’s take a look at how it works.

Related: How to Sync Your iOS Device with macOS Catalina

1. Unsurprisingly, the first step is to open up the Reminders app and select a list to start working with.

2. Once you are in a list, tap on “new reminder” and type in whatever item or action you want to add.

4. Scroll down and look for an option labeled “Subtasks” and tap it.

5. It will ask you to “Add reminder,” so go ahead and press on that and enter additional reminders. As you enter each reminder, you will see that the “Add reminder” button continues to get pushed down, leaving you with the opportunity to enter a multitude of subtasks.

6. After you have entered all of your relevant subtasks, tap “Details” in the top-left corner and then hit “Done.”

7. It really is that simple. You can even press and hold on each subtask and move them around to reorganize.

If the first method was not for you, the good news is there is a second way to create subtasks in Apple’s Reminders app.

1. Open Reminders in the same way you did in the option above and create a new task that will serve as your primary reminder.

2. Unlike the first method, we are now going to create a second new task that will eventually become a subtask to the entry you wrote in step one.

3. Here is where things differ, as you will need to press and hold on the second task. If you are having any issues with this step, it is important to make sure the cursor is not active on this line.

4. Drag the second task underneath the first, and it will automatically make it a subtask.

Related: How to Supercharge Apple Reminders with Goodtask

As with its iOS counterpart, creating subtasks in the Reminders app on macOS is simple and straightforward. Like typical Apple, there is more than one way to achieve a goal, so let’s take a look at both methods.

1. To kick things off, open the Reminders app on your Mac. 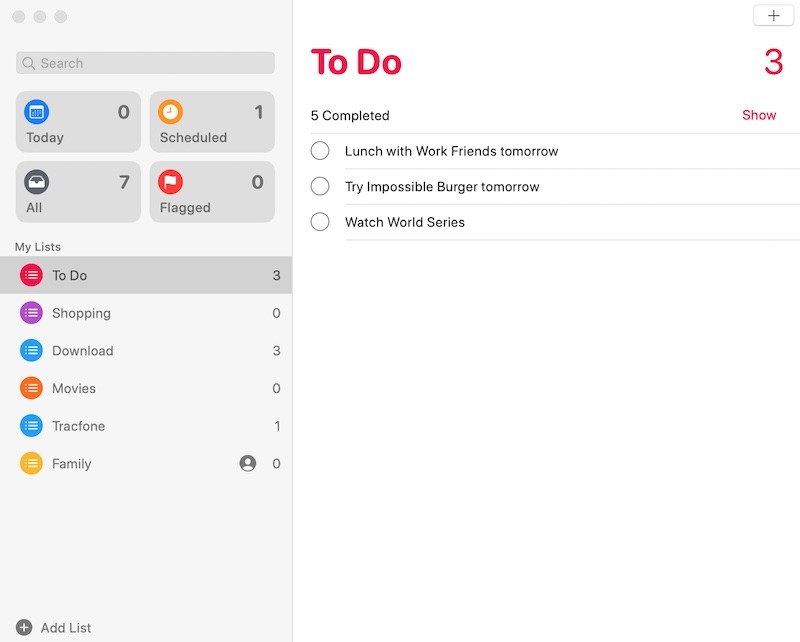 2. Enter the first task you want to become your “primary” or “parent” task.

3. Add a second task that you want to utilize as a subtask.

4. This is where things differ from iOS, as you will need to right-click using a mouse or trackpad. After right-clicking, click on the option labeled “Indent Reminder.” 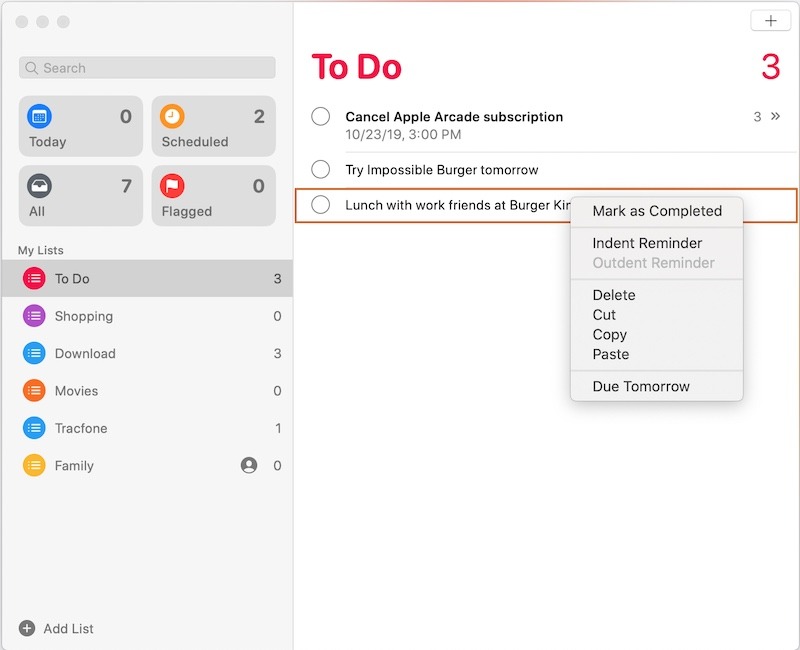 5. Immediately upon clicking “Indent Reminder” the selected task will automatically move into a subtask position. 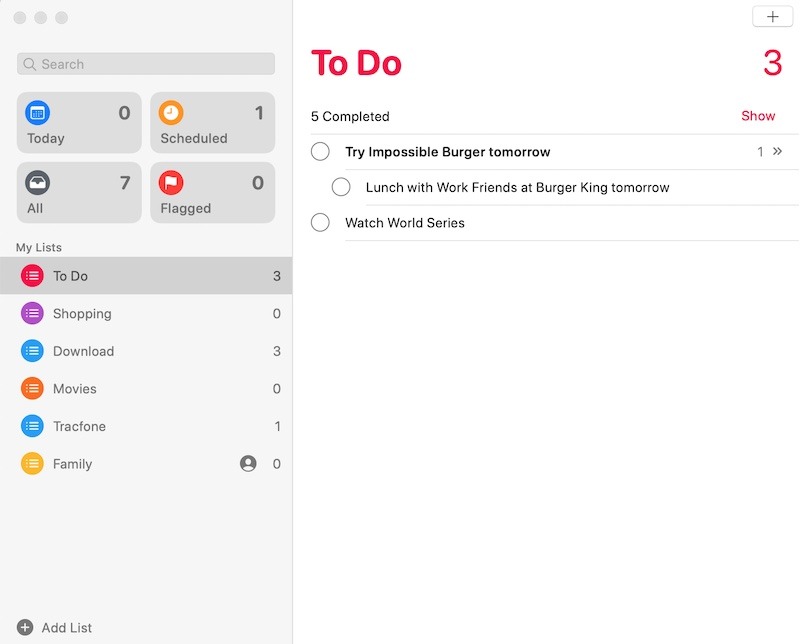 1. For this method to work, create two primary tasks, then drag one of the new tasks underneath the one you wish to set as the parent task. 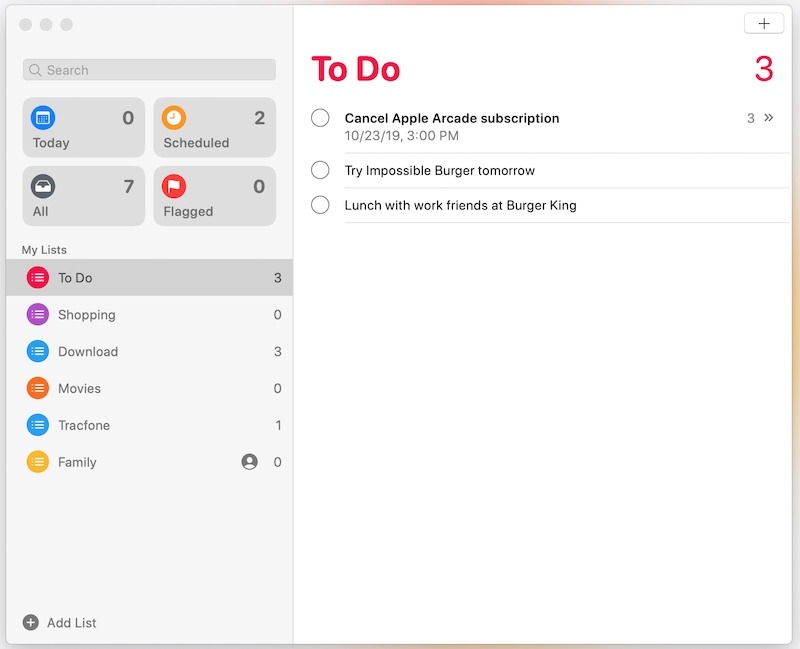 2. Once a colored line appears, let go of the mouse or trackpad and “drop” the task. It will automatically move underneath the primary task and become a subtask. 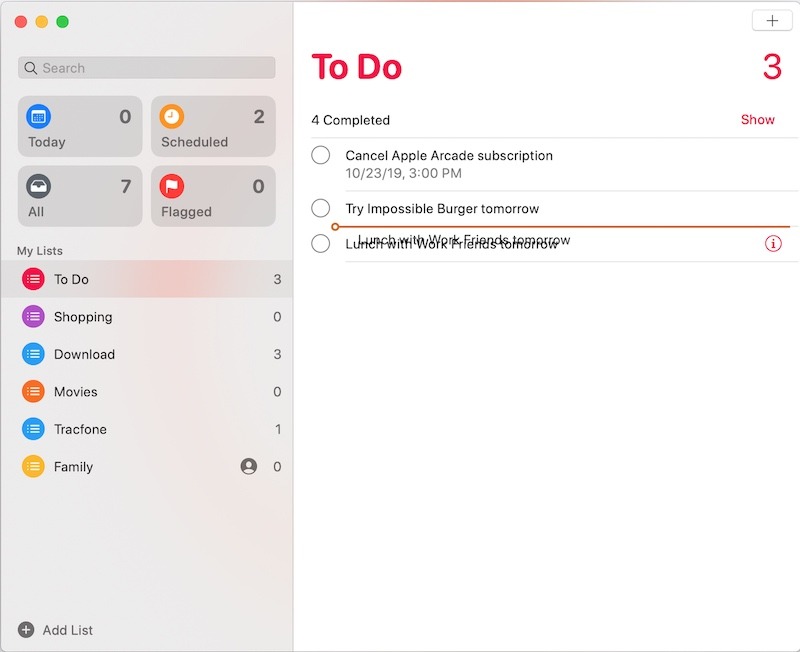 There is plenty of competition in the Apple universe for the best to-do and reminders list. Sometimes the easiest list is the one that comes pre-installed on your device. The release of iOS 13 and macOS Catalina has made an already great app even better. The ability to add subtasks is just one more reason this app deserves a permanent place on your home screen.

Playing Old DOS Games on macOS with DOSBox
How to Run Android Apps on Mac
How to Set Live Wallpapers on an iPhone
Apple Pay Not Working? Here’s How to Fix It
How to Get Rid of the Floating Screenshot Preview in macOS
The Anatomy of macOS App Bundles
Syncing macOS and iOS: How Do They Connect?
How to Boost Your MacBook Productivity with These 5 Catalina Features