It’s never been more fun to be a photographer, and that counts for if you’re a professional or an amateur. The advent of home computers, and even more apps, makes digitally altering photos not just fun, but easy as well. One of my favorite photo-altering apps is ColorSplash Pro for Mac. My photography student daughter even used it to make a wedding gift for her cousin.

Now they’ve come out with ColorSplash Pro for iOS as well. That means that you can alter the color content of your pictures on the Apple iPhone right after you take them. You don’t have to wait until you’re home again and on your Mac. You can snap a photo, alter it, and share it within minutes. 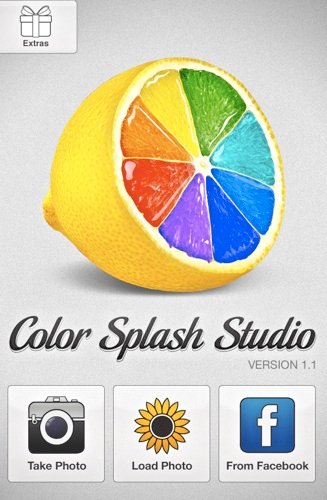 IN addition, using ColorSplash Pro for iOS isn’t confined to just after you took your pictures. You can take a picture within the app, use an existing photo off your camera roll, or even pull one off Facebook. The Facebook option isn’t confined to just the pictures you have uploaded; it allows you to alter pictures uploaded by your friends as well. Just make sure you have their permission to download and change their pictures first.  After choosing a picture, it offered me a choice of cropping it to make it into a square, but I wanted the full picture. 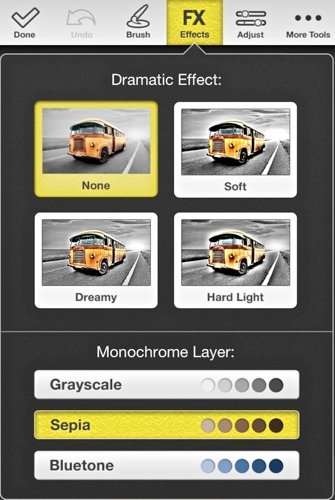 I started with a picture my daughter took of me. With a red shirt, and a boring background, I thought it was the perfect picture for changing the color content. After selecting the picture, I came up with the choices for FX. I can start with a slate of grayscale, sepia, or bluetone. There are also choices for dramatic effect, from soft, hard light, etc. Being older, I knew I didn’t want hard light, and thought I might want “soft,” to get rid of a few years. However, I found the picture not very sharp to start out with, so I actually went into iPhone and sharped the image and brought it back in again. 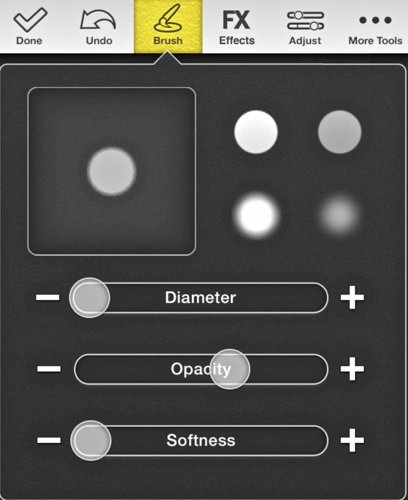 After you have the slate of grayscale, sepia, or bluetone, you can add color back in with the Brush. You can choose the diameter, opacity, and softness of the brush. This is where I was putting the red color back in, so I didn’t want a soft brush. The brush still doesn’t go very small, so instead of making these color alterations on my iPhone, I actually did it on my iPad. On the iPhone, it does give you a magnified window to see the area you’re working in up close, but I just found it easier to do it on my iPad. The app isn’t optimized for the iPad, but it still works, just the same. I just ran the brush over the shirt in the picture to put all the red back in. I did try adding back in the color of my hair, but that didn’t look as good as I thought it would. 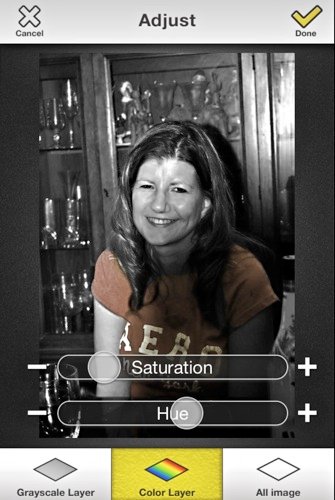 Along with choosing the color slate to start with, and choosing how your brush will perform, and where it will go, you can also make choices with saturation and hue. After changing my photo to grayscale and adding just the red back into my shirt, I thought it seemed a little too harsh. I played around with the saturation and hue to get the tone softer. It seemed as if less is more in this case. Additionally in the “More Tools” option, you can check your mask. I actually found there was a few parts I missed with the brush, so I touched that up so that the altered red color was completely put back in. 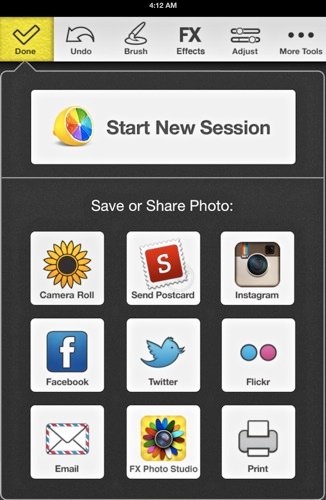 ColorSplash Pro for iOS gives you a lot of choices for how you can share the great pictures you can create. Along with emailing and sharing to Facebook, Twitter, Flickr, or Instagram, you can also save it to your camera roll, print it, or share with FX Photo Studio, another photo app by the same developer. My favorite option here is Postcard. You can take your creation and turn it into a postcard. I took one my daughter’s photos, altered it, and shared it via the Postcard option for $.99. She’ll receive it in the mail in two to seven days.

It’s a small app, but it definitely packs a punch. It only has a few options, yet the possibilities are many. Photos can go from good to great, as you can make different things pop out and be highlighted. I do hope they create an app for the iPad at some point. With the retina display and better camera on the third-generation iPad, it’s exactly the photo app that’s needed.