Are you one of those users that are fed up with your smartphone’s battery life depleting quickly with no power socket available to plug in your charger? Most of us will have heard of these powermat-type devices, which allow you to place your phone on the table and have it charge without needing to plug a cable in. There are new developments on this front – Witricity, are developing a new technology that can charge your electronic devices wirelessly. The creators of this revolutionary technology are claiming that you won’t even have to remove your electronic device from your suitcase or handbag to charge! Furthermore, you will be able to charge multiple electronic devices at once. This article focuses on and explains the science that is leading to the creation of the wireless charger. 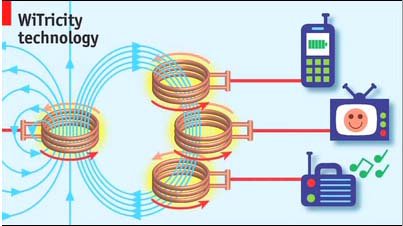 Nikola Tesla, an inventor and electrical engineer, in the early twentieth century first postulated that it is possible to transmit electricity through the air. This scientific concept led to the formulation of the ‘resonant magnetic coupling’ or ‘magnetic induction’ process which the wireless charging technology is based on. For example, magnetic induction is utilized for recharging electric toothbrushes. The base of the toothbrush has a magnetic coil that creates a magnetic field. In the toothbrush, a second coil encapsulates some of that magnetic field which generates an electric current. However, in this particular scenario, the power transfer between primary coil to secondary coil needs to be performed at a close proximity for it to function.

Due to recent developments and practical applications of this science, the wireless charging technology has been designed to effectively charge objects that are around three or four feet away – even farther – from the primary source of electricity. Marin Soljacic, a physics professor at the Massachusetts Institute of Technology, is responsible for formulating Witricity’s revolutionary technology. Prof Soljacic and his colleagues managed to extend the length of induction by amending the structure of the magnetic coils that create oscillating magnetic fields. They successfully engineered the magnetic coil that plugs into an outlet to resonate at the same frequency as the companion coil embedded in the electronic device. As a result, static energy is transmitted from the wireless receptor pads in the charger through the air to effectively charge up batteries in nearby electronic devices. Professor Jason W. Fleischer who has no financial affiliation to Witricity, but has research is in electromagnetics and optics claims that this novel technology is a ‘better form of induction’. Prof Fleischer elaborates that electronic devices will no longer have to be directly connected or placed in a certain position to recharge.

Now with the Science component figured out, how would the wireless charger work in day to day life? In a typical scenario, a power transmitter could be installed in a room and starting charging your device when you enter it. It could also be placed in a workplace, allowing numerous employees to keep their devices full of juice. Although there may be instances where an electronic device is unable to charge wirelessly due to it being too outdated or requiring an adapter capable of transmiting electrical energy wirelessly to the device. Furthermore, all electronic devices may not charge equally.

Wireless chargers will have far-reaching implications for our lives as it will make it everything that little bit easier. As the technology continues to improve to the point where you could be in any location and your electronic devices are able to charge wirelessly will be a magnificent achievement.