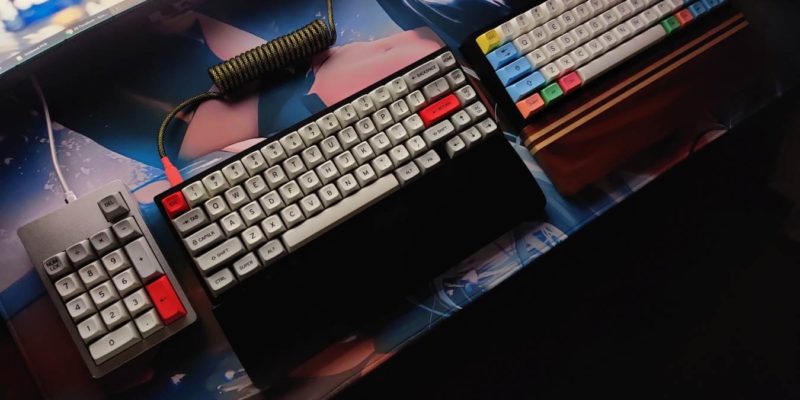 If you’re reading this, there’s a good chance that you have been exposed to the world of custom mechanical keyboards through TechTubers or even the mainstream tech media. You have come here seeking one of your own but don’t know where to start. This isn’t surprising because building a custom mechanical keyboard is a complicated niche, and the Internet forums tend to be more confusing than helpful.

If only there were a handy simplified guide good enough to get you started, something that lets you learn the ropes the best way there is to learn anything – that is, by getting your hands dirty. Well, this is that guide.

What Are Custom Mechanical Keyboards?

The need for higher-quality components should be self-explanatory, but custom mechanical keyboards look, sound, and feel better compared to their mass-manufactured counterparts. These keyboards are aesthetically superior thanks to high-quality keycaps that are usually color coordinated with custom sleeved cables and handmade acrylic or wooden wrist rests. Their appeal, however, extends beyond good looks. These keyboards deliver a significantly better typing feel thanks to exotic switches combined with bespoke cases milled out of solid blocks of aircraft grade aluminum.

Understanding non-standard form factors is the first step toward building a custom keyboard. The nondescript full-size keyboard connected to your desktop computer forms the foundation for all modern derivative form factors. It’s comprised of alphanumerics (alphas for short), which has the alphabet and numbers along with punctuation marks, function row, navigation (nav) cluster, and numpad.

Note: the modifiers (larger sized keys, such as Ctrl, Alt, Shift, Tab, Enter, and more) have also been grouped with the alphas for the sake of simplicity.

Every derivative keyboard form factor is created by omitting one or more of these elements, with each one named relative to the percentage of the full-size keyboard. Tenkeyless (TKL) or 80 percent keyboards, for example, omit the numpad altogether. This form factor is popular with gaming keyboards since it frees up space for a larger mouse pad without forcing gamers to spread their arms out unnaturally.

However, the 60 percent form factor is preferred in the custom mechanical keyboard scene due to its sheer portability and the way it keeps virtually every single key within reach. This is a useful feature for touch typists, who are loath to take their hands off the home row. This form factor does away with everything except the alphanumerics and modifiers, with the function and arrow keys hidden behind a separate layer that can be accessed using a dedicated function key.

The 65 percent form factor is essentially a 60 percent keyboard with a single column of oft-used navigation keys along with the arrow cluster accommodating the existing layout while making the keyboard longer by only a single column. This is a popular choice among keyboard geeks who can’t live without arrow keys.

Then there are crazier form factors such as the diminutive 40 percent keyboard, which is essentially a 60 percent keyboard missing the entire number row and a few modifiers as well. This form factor is also popular with touch typists who claim to be as fast on these keyboards (if not faster) than even full-size keyboards.

By now you will have some idea about which keyboard form factor you prefer. But you still can’t build a keyboard without knowing what’s inside. Most keyboards are comprised of six major parts. The visible components of the keyboard include keycaps and case, which is the chassis that houses all other components and gives the keyboard its familiar silhouette.

The keycaps are attached to switches, which typically employ a mechanism leveraging electrical contacts to register input. These in turn are soldered onto a PCB. That’s the brain of the keyboard, and it is littered with conductive traces that link all switches to the microcontroller.

Next up is the plate. This is the skeletal support frame that holds the switches firmly in place and prevents the soldered joints from experiencing stress. Finally, stabilisers are either attached to the plate or PCB, and these help stabilise long keys such as space bar, enter, and shift. Without stabilisers, these keys would simply see-saw around the switches.

Knowing the components of a keyboard is one thing, but choosing the right kind calls for greater insight. Let’s take a look at what separates different component varieties.

Keycaps have the greatest bearing on the looks of the keyboard, followed by the sound itself. While you can buy a good set of keycaps for $30, it isn’t uncommon for keyboard enthusiasts to spend upwards of $200 on some high-quality sets. Keycap sets are available in a variety of profiles such as OEM, Cherry, SA, DSA, and MT3. These differ in shape as well as height, while affecting the look, feel, and sound of the keyboard.

The cheapest keycaps are manufactured from ABS plastic and have laser-etched or pad-printed legends. This kind of plastic wears out quicker and develops an unsightly shine over time. The printing is also less durable. The opposite end of the spectrum is populated by keycaps made from PBT plastic, with legends formed using a complicated and expensive double-shot process or dye sublimation. PBT plastics are resistant to wear as well as shine. Legends formed through the dye sublimation or double-shot process are virtually impossible to rub off.

Switches come in three major categories: clicky, tactile, and linear. Clicky switches produce both tactile feedback as well as an audible click when the switch is actuated. These are ideal for typists. Tactile switches, on the other hand, only provide a pronounced tactile bump instead of a click on actuation. These switches are meant for typists who seek some feedback while typing but prefer a relatively more silent keyboard.

Linear switches provide neither tactile nor clicky feedback when the switch is depressed. These switches are usually chosen by gamers who seek quick and consistent actuation that is conducive for repetitive key presses consistent with gaming. Each category of these switches can be further customised with varying spring weights and silent variants.

Picking a favorite switch from the hundreds of different options is a deeply subjective and personal experience. That’s a journey of self discovery you must tread on your own.

The case is the most important factor affecting the build quality as well as the sound of the keyboard. The cheapest cases are manufactured from injection-moulded plastic and generally have poor structural rigidity and fit/finish levels. However, CNC-machined cases made from quality plastics, such as polycarbonate and frosted acrylic, aren’t uncommon either. The most premium cases are machined from solid blocks of aluminum and further reinforced with brass weights. These are widely considered the gold standard in the custom keyboard space.

The choice of case material notwithstanding, the cost and complexity of any custom keyboard is further dictated by the mounting style. As the name suggests, the mounting style of a keyboard decides how the plate (or in some cases the PCB) is mounted to the chassis.

Tray mount keyboards tend to be the cheapest and easiest to manufacture. Not surprisingly, this mounting style is the staple in nearly all entry-level custom mechanical keyboards. Tray mount keyboards have the PCB screwed down to the mounting posts sticking out of the case. However, this leads to inconsistent sound because the PCB is stiff near the mounting posts and flexible further away from them. This effect can be controlled by opting for a stiffer aluminum or brass plate but cannot be completely eliminated.

The integrated plate design is the polar opposite of this approach and uses a two-part case, where the top half functions both as the plate and the top frame of the case. This design is relatively more expensive to manufacture but delivers a consistent sound, albeit at the cost of completely eliminating flex, which leads to a harsher experience when bottoming out the switches.

The third broad type of keyboard mounting is even more complex and costlier to implement, since it needs a two-part chassis in addition to a dedicated plate. This includes the top mount, bottom mount, and sandwich mount keyboards, with each type denoted by the part of the chassis to which the plate is attached. This keyboard construction style provides a consistent sound. What’s more, since the plate is attached to the chassis along the edges, it also opens up the option of using flexible materials such as polycarbonate for those who prefer a softer bottom out.

Some new (not to mention expensive) custom mechanical keyboards now come with silicone gaskets sandwiched between the plate and the chassis in various combinations of the aforementioned mounting styles. The basic idea is to further isolate the switches from the chassis for a better sound signature and tactile feedback. These are collectively called gasket mount keyboards.

That’s essentially all you need to know in order to move onto the next step towards building your own custom mechanical keyboard – that is, choosing the right parts according to your personal preferences. The next and final installment of this guide will tell you where to find the components and how to put them together.