This article is part of the Blender Guide series:

Continuing our ongoing series on how to use the popular open source animation, video and compositing app, Blender, we move to animation. Once you’ve made 3D shapes and textured them in Blender, how do you make these objects move around, and how do you render videos?

In this article we cover the basics of animation – keyframes and motion. We also give a quick-start intro to rendering your finished work as a video which will lead into a forthcoming article covering rendering in depth.

If you want to follow along and don’t yet have a copy of Blender for your platform, go to www.blender.org and get your free copy.

Once you’ve learned to model, texture and light your objects in Blender, you need to render them as some kind of still or animation. We’ll come to the rendering part in a second, but let’s first look at animation.

In a broad sense, animation is a process of making individual images. Then by taking this series of these images and showing them on screen one after the other at twenty-five to thirty frames per second (fps), you get the illusion of movement. 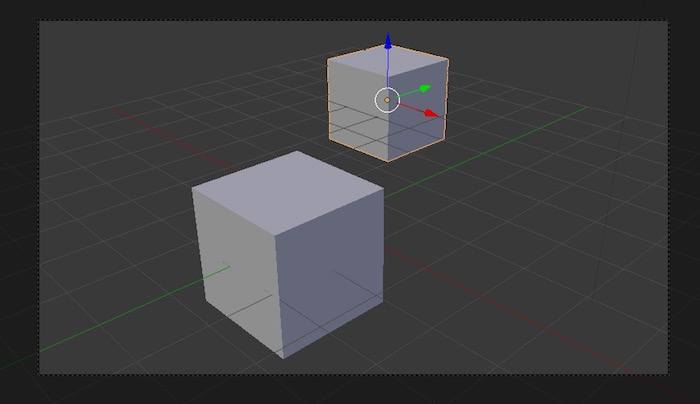 To make an object move in Blender, you need to set a start point and an end point to the move, and then all the points between the start and end are “in-betweened” or calculated. This means you don’t have to set each position manually by hand like they did (and in some cases still do) in traditional animation.

Imagine a simple animation. You slide a cube across a plane.

Animation in computers is done with keyframes. You set up the position of the cube object in the first frame (frame 1) and then choose another frame of the animation (say frame 100) and then move the cube to another position.

When you render, the software puts the object in the position you set for the first keyframe, renders an image, and then goes to the next frame. On the next frame, it moves the object towards the next keyframe aiming, as it goes through the frames rendering each in turn, to end up on frame 100 with the object positioned as you specified for the last keyframe.

In Blender, setting keyframes is very easy. But as with everything in Blender if you don’t know where it is, you can’t find it.

Open the basic scene in Blender. Change the scene length to about 100 frames.

Click the “Go to first frame” button to make sure you are at the start on frame 1. Drag the cube somewhere in the frame either freehand or using the axis arrows. 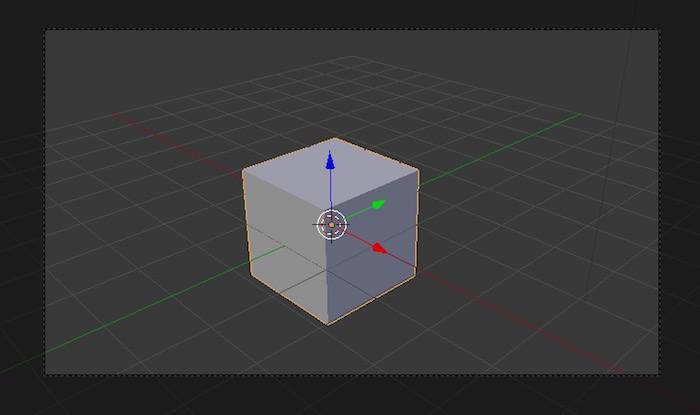 Press the “I” key and choose “Location” from the popup menu. You have just set a keyframe. 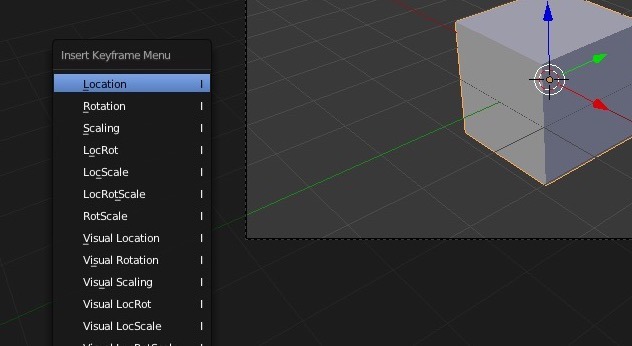 Now slide the green timeline cursor to a frame about a quarter of the way through, around 25. Move the cube somewhere else. Press “I” and choose “Location.” 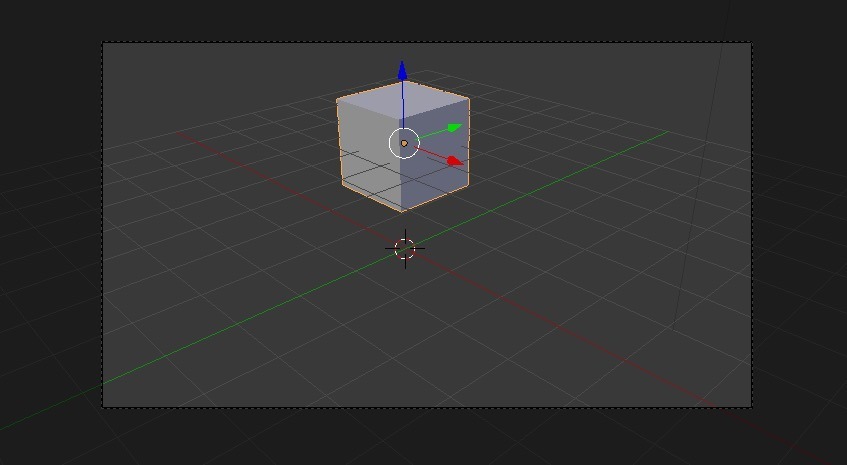 Repeat the process at frame 50 and finally at frame 100. 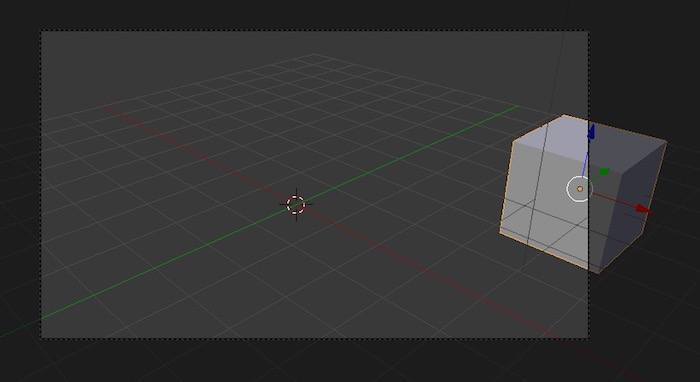 You can even go back and insert a keyframe between ones you have already set. Drag the green cursor on the timeline to around frame 75 and then move the cube around to another spot. Remember you can move it up and down as well as side to side; just drag the blue arrow. 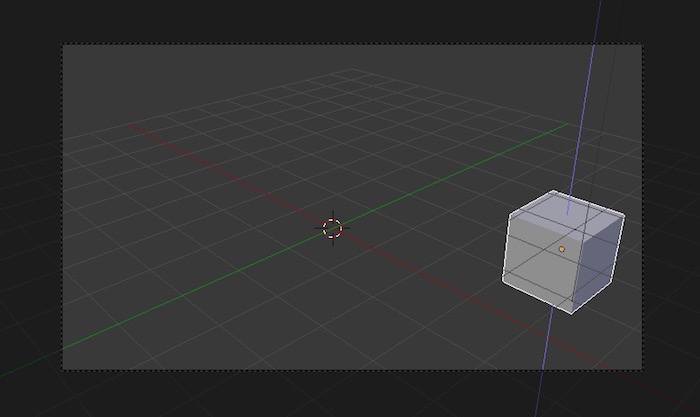 Then press “I” to make another “Location” keyframe as before.

Each time you make a keyframe, you insert a little yellow line on the timeline indicating the presence of a keyframe.

Now press Play on the transport controls. The cube zips about the screen hitting all the keyframes you set in order and fast enough to get there in time no matter how many laws of physics it has to break to get there.

On the right of the screen is the control panel. The row of buttons contains all the properties and controls for the program. The little camera button is the display and render properties. Click it.

Scroll down to the “Dimensions’ panel and choose “HDTV 720p” from the drop-down menu. Change the framerate to either 25fps or 30fps. 24 fps is for film (or at least film look). 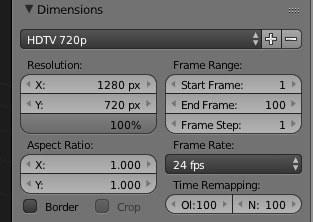 Scroll down to the output tab and click the little folder button next to where it says /tmp/ and give the file you will render a location and name. 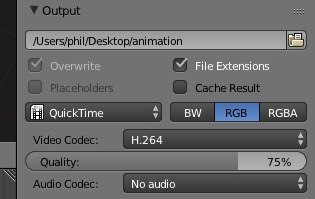 Choose a file type; either AVI or MOV are good choices. We chose Quicktime and H264 as the codec.

Finally, let’s add a little motion blur to make the output look a bit more realistic. Scroll down to the sampled motion blur panel and check the box to turn it on, turn the motion samples up to 5 and the shutter duration to 1.0. Now when the object moves fast it will blur as it would in a real camera. 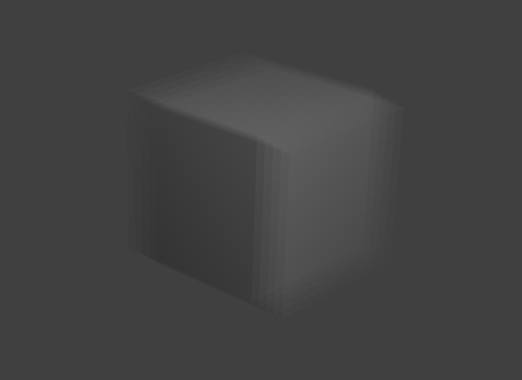 Don’t worry so much about what all these things mean for now. We’ll cover the rendering side of things in a future article.

Scroll back up to the top and in the Render Panel click the Animation button; your scene will render to disk. Depending on how complicated your scene is, this may take some time.

The resulting render looks like the cube is riding a crazy invisible roller coaster, but it is real animation in its rawest form. This is how the most expensive and most famous animated films have been made, with keyframes for arms and legs for walking motions, and facial expressions for syncing with the actors’ vocal recordings.

You can legitimately call yourself an animator now, should you choose to do so.

Setting keyframes lets Blender do all the heavy lifting by drawing all the in-between animation frames for you. All you have to do is set the key frames.

Let us know if you have any questions about animation in Blender or what other Blender topics you would like to see covered in depth in the comments below.