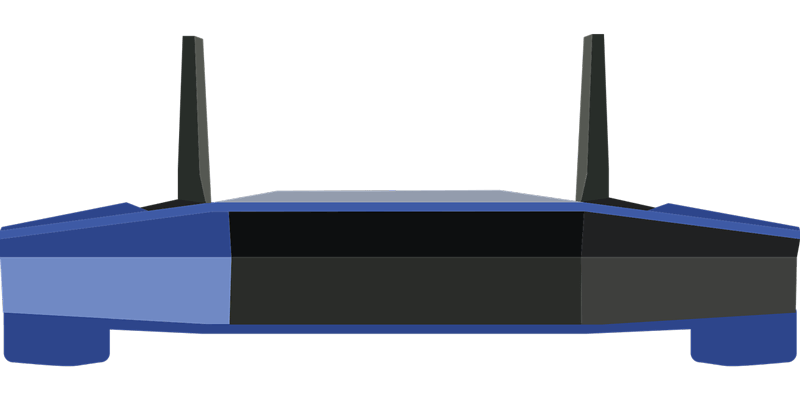 If you’ve ever tinkered with your router, then there’s a good chance you did it to change the WiFi channel because your Internet was too slow or perhaps because you’d read somewhere that Channel “X” (Just an example; there isn’t a real Channel X.) is the perfect one, free from other people and signal interference.

But now that most routers are shipping with the ability to transmit signals across 5GHz frequencies rather than just the lowly 2.4GHz, a big question that keeps coming up is “What’s the best 5GHz channel?” As with the 2.4GHz channels, there is no universal answer; it depends on the amount of people around you using the same channel and outside signal interference, among other things, but there are a few more things to consider if your router’s on the faster 5GHz frequency and to check for the best WiFi channel for 5GHz connection.

Related: How to Find the Best Wi-Fi Channel for Your Network

There Are More Channels at 5 GHz

When you go into your router settings on a 5Ghz frequency, you’ll see that you have quite a few more channels to pick from. The higher the channel, the higher the frequency, going up in increments of 5MHz per channel. This technically means the higher the frequency, the more data can be carried on it in less time, but it’s not quite as simple as that, so before you just go and select the highest possible channel on your WiFi router, there are a few things to consider.

At 5GHz there are four “Bands” available, each containing a bunch of WiFi channels. Here’s an image to give you an idea. (The “ISM band is reserved for industrial, scientific and medical use.) The first band, UNII-1, is designed mainly for domestic use because from Unii-2 upwards, your router needs to have DFS (dynamic frequency selection) and TPC (transmit power control) built in, which will automatically adjust the channel and power output of your router so it doesn’t interfere with military, radar, weather station signals and so on.

Log into your router, and you’ll be able to see which 5GHz channels are available to you. The 5GHz channels generally don’t overlap (unlike many of the 2.4GHz ones), because in many countries contiguous channels are “bonded” to have a higher bandwidth. This means that on your router you may see that the channels are all four numbers apart. There are twenty-three non-overlapping channels at 5GHz, as opposed to just three at 2.4GHz, making each channel equally good when it comes to not having interference from other channels. 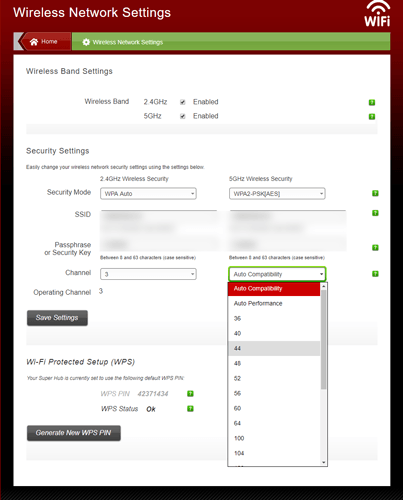 So Which Is the Best 5GHz Channel?

As I mentioned before, there is no universal “best” channel for 5GHz frequencies, but there are ways to find out which one’s best for you. Download a WiFi Analyzer app, such as WiFiInfoView on PC or WiFiAnalyzer for Android, then take a look at what the channel situation is in your area. Are there a lot of people on the same channel as you?  That could be slowing you down. If you’re using WiFIAnalyzer, tap the menu icon at the top left, then “Channel Rating,” and tap “5 GHZ” at the top of the screen. This will rate your channel based on the power of your signal, congestion and interference. 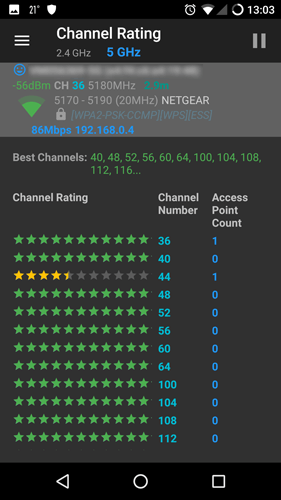 The higher channel numbers, operating at higher frequencies, tend to be used by radar, weather stations, and the military. If that happens while you’re using your WiFi, then your signal may be bumped to another frequency. This shouldn’t be an issue, though it can cause momentary interference as your channel gets switched. There are also some old phone models that still operate at the higher frequencies/channels, though the likelihood of this affecting your signal is very small.

With all that said, perhaps it’s best to stick to the channels in the first “Band” I talked about earlier (36, 40, 44, 48), because these are designated for domestic use and are least likely to get interference from exterior factors. As these tend to be the “default” channels, there will be more people using them, which is why you should use a WiFi checker to find which ones are least congested while offering you the best signal.

One of the big perks of 5G is that channel overlap is a virtual non-issue, so pretty much any channel you decide to use won’t be affected by it. With the amount of channels available, leaving your router on “Auto” is likely to place you on one that has the least congestion and interference. Should that not work, then the above tools and tips should guide you to the 5GHz channel that will make the most of your swanky modern router.