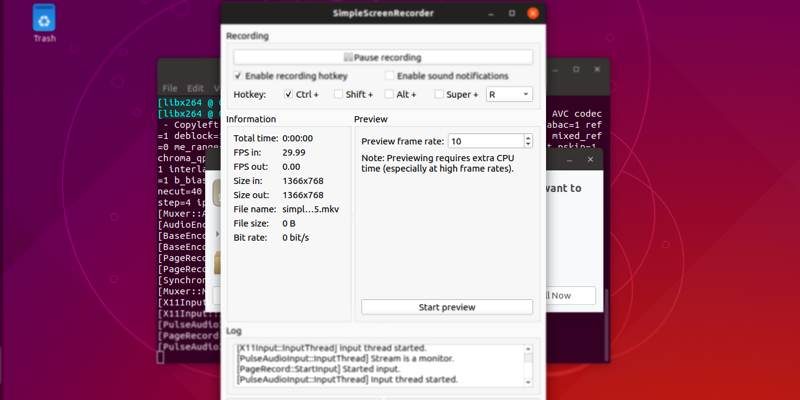 There are plenty of reasons you might need to record your screen. Maybe you’re a developer looking to demonstrate an app you built. Perhaps you’re looking to do an instructional screencast. You might just want to show a family member how to do something.

You have plenty of choices when it comes to which screen recorder to use on Ubuntu. Some are simple to use, while others are more complicated but have additional features. It also depends on whether you prefer a GUI or the command line.

SimpleScreenRecorder is the first entry on this list because its name so perfectly describes exactly what it is. It’s a simple app that records your screen. It’s not limited to video, as it can record your system’s audio as well. 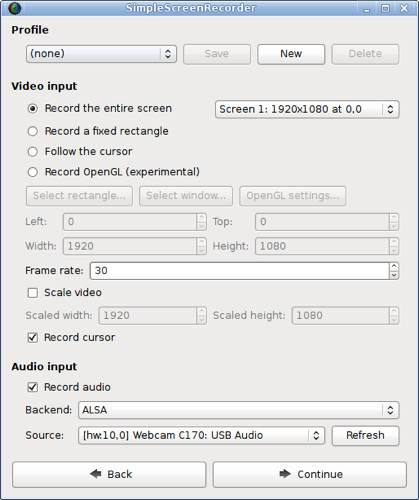 Looking at video, you can select the frame rate at which you want to record. You can also choose whether to record the whole screen or just a portion of it. When it comes time to export, you can choose from a variety of codecs, including MKV, MP4, and WebM.

The second entry on this list with a name that describes exactly what it does, RecordMyDesktop is very tweak-able. Part of this is because RecordMyDesktop is a command-line tool at heart, albeit one with two different graphical frontends.

For those who use Gnome or Xfce, there is gtk-recordMyDesktop, while qt-recordMyDesktop is there for KDE fans. The initial interface in the GTK version is simple, but tapping the “advanced” button exposes much more functionality.

RecordMyDesktop features optional on-the-fly encoding and adjustable frame rate. It can also record audio via ALSA, OSS, or the JACK audio tool, which lets you send audio from any number of apps to it.

VokoScreen combines simplicity with features that some other screen recorders on this list don’t have. Like the others, it supports recording audio and outputting in multiple formats. 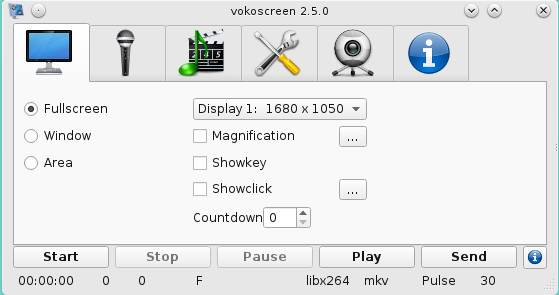 One feature VokoScreen offers that the others don’t is webcam support. You can see a preview of your webcam feed while recording, and you can record it as well. Other features include a delay timer and hotkey support.

The one downside is the user interface, which looks like it’s on the plain and utilitarian side. Still, that’s a small complaint for an app this full-featured.

Calling FFmpeg a screen recorder is like calling your car a chair. Yes, you can sit in your car, but it can do a whole lot more. FFmpeg is the same: it has tons of functionality, but it’s also a capable screen recorder.

FFmpeg is essentially a video toolbox with screen recording as one tool. As with many of the above items, you can choose your frame rate, whether to record the whole screen and more. You can also record audio via ALSA.

Here’s an example command for recording your screen:

This would record a 1280×720 portion of your screen starting at 250×150 pixels from the top-left of your screen. The output format would be MKV.

If you’re interested in FFmpeg, we have an entire guide to screencasting from the command line.

There are plenty more screen recorders out there if, for some reason, none of these work for you. Still, the four listed above are different enough that you should be able to find one that is suitable.

What if you prefer to use Windows, or you use it as well Ubuntu? You have a ton of options for screen recorders on that platform. We already have a list running down the best screen recording software for Windows. Therefore, you’re set whether you’re running Windows or Ubuntu.