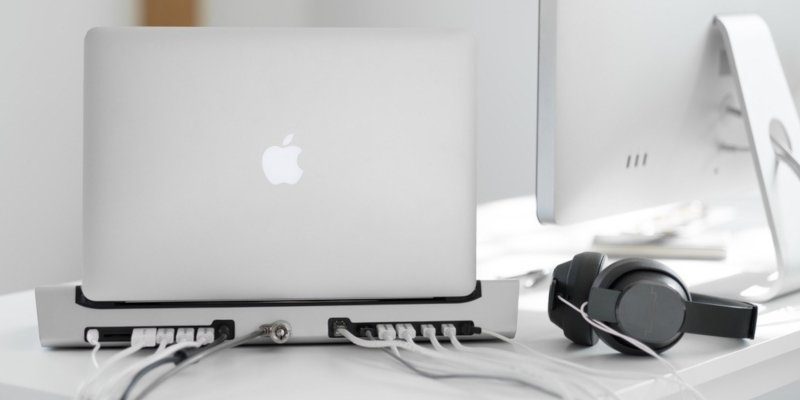 Laptops are great for taking desktop-class computing power on the go. They make life easier, as you get to take what you need, wherever you go, but when you’re back at home, the lack of legacy ports on 2016 and later MacBook Pros is an issue.

Apple removed all legacy ports from these MacBook Pros. Connecting ANY device to any MacBook Pro with Touch Bar now requires a properly-equipped peripheral or a dongle. USB-C-based peripherals aren’t very common yet, and dongles make computing messy and complicated. Displays – actually multiple displays – are a particularly large problem. The best way to solve this is with a docking station.

Here are some of the best docking stations to address not only the need for legacy ports and reduced USB-C dongles, but also the need to attach multiple displays to your MacBook Pro.

There are several models of the HyperDrive Pro, and the biggest one gets our pick. It’s nice and slim, packs all the ports you want, and is compatible with all MacBook Pro models dating back to 2016 (and the 2018 and 2019 MacBook Air). At $119.99, it’s cheaper than many other options too.

Designed to rest alongside your Macbook Pro like the sleekest of sidekicks, the Elgato Thunderbolt 3 Dock isn’t the cheapest docking station out there, but it’s one of the best. It also comes with a two-year warranty, which gives it an edge over the default one-year you get with most other docks. Finally, it delivers a solid 85W of power to charge your Macbook Pro.

With a sleek, svelte design made to tuck neatly under your Macbook Pro, the Linedock is almost certainly the best-looking option in this list. In fact, it’s so low-profile that it almost looks like it could have been designed by Apple itself. The Linedock is designed for the 13″ MBP.

The LandingZone USB-C Dock for MacBook Pro with Touch Bar is a non-Thunderbolt-based dock with a USB-C passthrough (which works with Thunderbolt accessories). This dock is meant for 15″ MBPs only and won’t work with Windows Machines.

Of all docks in this roundup, this dock provides the right mix of legacy ports and display support. It provides the best overall mix of features for the cost but lacks Thunderbolt 3 support. The LandingZone Docking Station for MacBook Pro with Touch Bar sells for $299.

OWC has always produced quality products, and OWC Thunderbolt 3 Dock is one of my favorite Thunderbolt docks.

The only issue I have with it is a lack of an additional TB port or two to easily connect more than one display without having to worry about additional connectivity or daisy-chaining devices. While five USB-A ports does help alleviate this, it may still be a concern for some.

The OWC TB3 Dock retails for $379. However, if you don’t need Firewire support, you can pick up the Mac/ Windows version for $289.

The Kensington SD5300T TB3 Docking Station is another cross-platform dock, supporting both macOS and Windows 10, that provides support for a single 5K monitor or dual 4K displays at 60Hz. As an added plus to the whole package, the dock can be mounted to the back of any VESA-compatible external display (via a mounting plate, sold separately), allowing for a cleaner, less-cluttered desk.

The Kensington SD5200T Thunderbolt 3 Docking Station retails for $329.99, and at this price, it’s one of the more expensive docks in this roundup. However, it is available via Amazon at a 20% premium for $262.99.

If what you’re looking for is multiple display support out of a Thunderbolt 3 dock, StarTech.com Mini Thunderbolt 3 Dock is the dock for you. It supports dual Display Port connections and also provides some additional legacy ports. With its cable attached, it really looks like an oversized dongle, but it’s also the most affordable dock in this roundup.

If your only concern is connecting more than one monitor to your MBP, then this is one of the more affordable ways to do it. Buying two – the 15″ MacBook Pro with Touch Bar supports up to four simultaneous 4K displays – would get all of those displays connected and still be cheaper than any of the other docks in this roundup.

Connectivity is key with a docking station, meaning the WAVLINK Universal Docking Station could be the dock you want and need if you’re looking to set up a dual-display system.

Finding the right dock for you is a matter of hit or miss, especially when it comes to the number and types of ports you need. When it comes to connecting multiple monitors, the better solutions don’t have you giving up a Thunderbolt port for display purposes.