Everybody has their own app store now! Apple has its App Store, Google has Play Store and now Microsoft has its own Windows Store, thanks to Windows 8. But to get some traction and to compete with other app stores, Microsoft focused too much on the quantity of the apps rather than the actual quality of all those apps.

This led to quite a stir when it was exposed that there are many fake apps designed to cheat users on their money and innocence. Of course, Microsoft took quick action and cleaned out some hundreds of fake apps and also enforced some tight rules to avoid future problems. Nevertheless, fake apps always exist. So here are the top 3 tips to avoid fake apps in Windows app store.

Well, this looks counter productive but please don’t always trust the “user reviews” part of the apps in the app store. This is because some app developers are using unorthodox methods to acquire positive reviews, like forcing users to review the app even before they use it, buying fake reviews, etc. Because of these manipulations, we cannot take user reviews for granted. Microsoft also didn’t implement any strict policies when it comes to the app reviews. So whenever you are trying to buy an app from the Windows app store, try to get more details on that specific app or developer by searching on the Internet rather than relying on the user reviews. 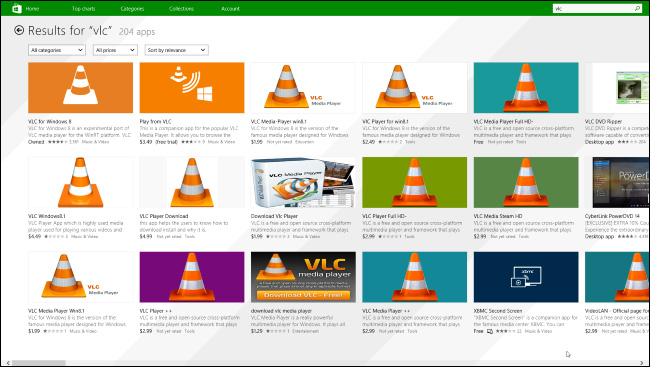 The one way to get more app downloads is to mimic the major brands and developers. This is a sure fire way as many users tend to download the apps which have official brands like YouTube, Twitter, etc.., in their names. Sure these apps may be better sometimes than the apps provided by the official developers or the brands but that doesn’t mean you should download an app just because you have seen the official name in the app title. So, always check for the details of the developers and only download the app if you trust them.

3. Don’t Pay for What You Can Get for Free

There are plenty of misleading apps in Windows app store that make money off free services. Some examples are VLC guides, VLC keyboard shortcuts, YouTube tips, etc.., that come with a fee, with some even demanding ridiculous payments like $9.99 just to act like a rip off of the popular free services like YouTube, Twitter, Facebook. Always be skeptical about what you are buying and don’t ever pay for what you can get for free.

Whether Microsoft has done a good job or not to maintain the integrity of its Windows Store, we are not sure. We can only do our part and be more diligent in checking out the app before we make the purchases. This includes both Apple’s App Store and Google’s Play store as well.

Do comment below if you have encountered (or conned by) fake apps in the Windows Store before.