Audacity, according to the developers, is a “free, open source, cross-platform software for recording and editing sounds.” This means that we can all work together, regardless of our preferred operating systems, to participate in the art of creating and editing audio. And Audacity supports plugins! Plugins are amazing, wonderful things, especially when the base program itself is amazing.

When compared to the commercial competition that can cost upwards of $800 and is restricted to Windows-only platforms, why shouldn’t we give Audacity a shot?

Who should use Audacity?

Now that we know what Audacity is not for, here are some projects that Audacity excels at:

Audacity is available for Windows, Mac OS X and Linux. It is available in most Linux distribution’s repositories, so you can easily install it directly from your package manager. In Ubuntu you can install it from the Software Center or just run the following command:

For those Ubuntu users who want the bleeding edge Audacity experience, feel free to add the audacity team ppa to get a daily build:

A word of warning: while daily builds can showcase the most up-to-date features, they may also contain catastrophic bugs and are generally not recommended for use in a production environment.

After everything is nicely installed and running, the first thing we need to do is check the Preferences to make sure our audio devices are correct. To do this we will go to “Edit -> Preference.s” 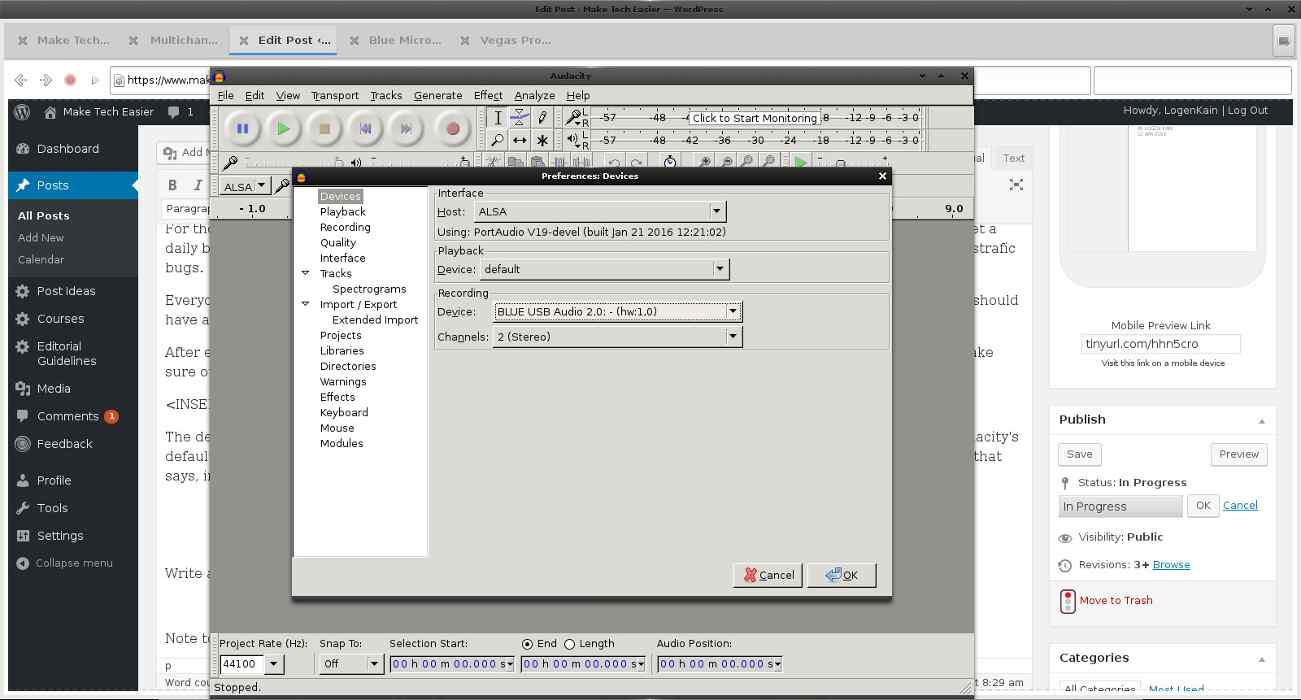 The defaults should be fine, but let’s say we have a Blue Yeti Pro USB microphone plugged into a laptop. Audacity’s default will most likely be the laptop mic.  To fix this we need to click the recording device’s drop-down menu and select the one that says, in this case, “Blue USB Audio.” Other USB microphones should have a similar listing.

Note: USB microphones must be plugged in prior to Audacity being started for Audacity to recognize them.

For those who are using a cheap 3.5mm microphone, choose the “Analog” option. In the case of the more professional XLR mics, special equipment is needed to interface the microphone with the computer and is beyond the scope of this guide.

Audacity is one of those things that is easy to start but difficult to master. Since we already have Audacity installed and the mic setup, all we need to do is hit Record (the big red Record button at the toolbar) and start talking.

When we’re done recording, we click stop, and the wavelength of our voice will show up in Audacity. If we click Record again, Audacity will play the track we already recorded while simultaneously recording a new one. This is incredibly handy for musicians trying to add another instrument to a mix. 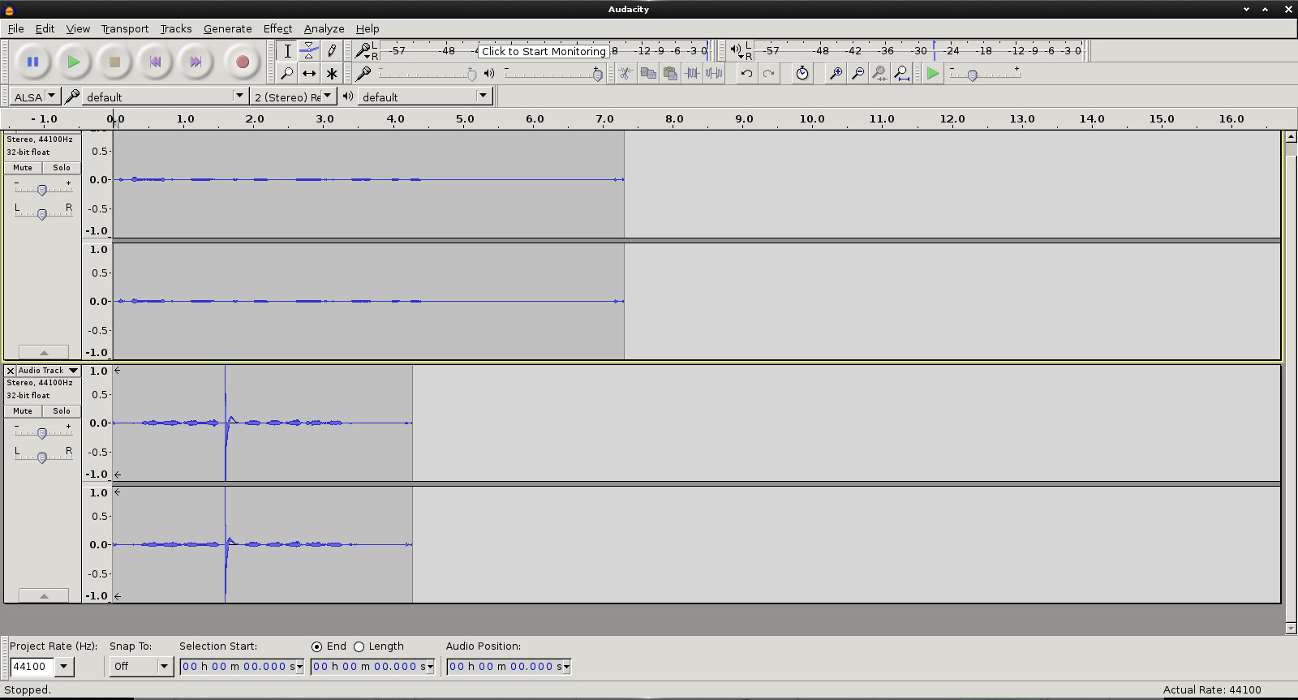 To visualize recordings is useful even from a basic perspective. Particularly, we can even use it to leave a note for ourselves.

So there we are, reading a passage from some short story, and we mess up on the second paragraph. To make it easy on ourselves we clap, or make some other loud noise, to cause a spike as shown in the second recording in the above image. Now when we come back and edit the audio, we can easily find the place where we made the mistake and edit it out.

All we have to do is click somewhere in the audio, hold “Shift,” click somewhere else and we will have a section highlighted. From here we can cut/copy/paste, play the selection, or add some sort of effect. To make things easy, the team behind Audacity decided to use shortcuts many of us are familiar with from using file managers. Some examples:

It would be insane to try and go through all of the plugins and special effects of Audacity, so we are going to focus on two major ones.

First, the ability to relatively easily filter out background noise. Derrik Diener wrote a great piece on how to do this last year.

To make things a little easier, we need to be sure to have five to ten seconds of empty audio at the begging of the track.

Why? The preview button will play the first five seconds of audio on the track, and it’s a lot easier to listen for background noise when there are no other distracting sounds.

At the end of his article, Derrik did mention the use of normalization to make audio sound better. While this works, the librevox project recommends replaygain, which  aims to get volume as close to 89 dB as possible.

This is particularly important for serialized content such as let’s plays, where we don’t want our voice to be louder or quieter video to video.

Have any thoughts on Audacity? Did you use it to make something awesome? Let us know below!