I have been a great fan of Dreamweaver. Even after I migrated to Linux Ubuntu, I still diligently use Dreamweaver (under Wine) for all my coding projects. To say the truth, running Dreamweaver in Linux with wine is not a great experience after all. At times, its performance can be lagging and the font and interface can be rather ugly and unmatching to the whole OS theme. The only reason that I am still using it is because I have not been able to find a worthy replacement for it. Quanta Plus, bluefish, geany, Netbeans, Eclipse, I have tried them all, and in my opinion, they are either not as good, or as user-friendly as Dreamweaver. That is until I found Aptana.

Aptana Studio is a free, open source cross platform compatible IDE that supports a large variety of languages. The default Aptana Studio’s editor comes with full support for HTML, CSS and Javascript. If you are a PHP or Ruby On Rails developer, you can also get it to support the the code you want by adding the respective modules via plugins. Platforms supported by Aptana Studio include PHP, Ruby On Rails, Python, iPhone Web apps, Adobe Air, Nokia and AJAX.

Aptana is based on the popular Eclipse, so if you have been a fan of Eclipse (or Dreamweaver), you shouldn’t have any problem getting used to Aptana.

Aptana is fully extensible by the use of plugins. While the default Aptana Studio’s editor comes only with full support for HTML, CSS and Javascript, you can install the respective plugins to add PHP, Ruby On Rails, Python or other functionality to it. The plugin management is integrated in the studio, so there is no need for you to download the plugin files and install it manually.

One thing that I love about Aptana is its tags suggestion, tags explanation and autocompletion feature. When you type a tag, it will show a list of similar tags and give you an explanation of what each tag does. This is also a feature that I like in Dreamweaver and is sorely lacking in most IDE.

On the sidebar of the editor’s window lies the outline pane that allows you to quickly access to any function within the code. This is one handy feature that is useful when you have a large CSS file or a long list of Javascript functions. 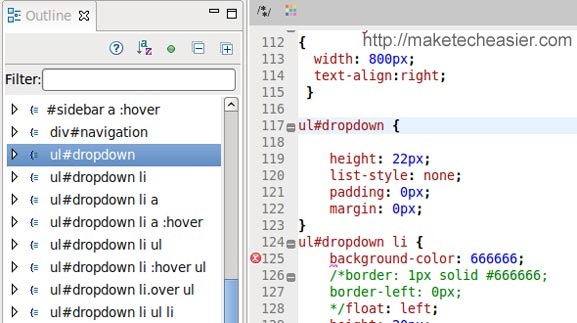 If you are coding HTML and CSS at the same time, you will want to view the changes you have made on the CSS file on your HTML file instantly. By placing the two files side by side, you can quickly make changes to the CSS file and view the result on the HTML preview.

You can also have two instant of the same file, one in the Source mode while another is in the Preview mode. This make it easier for you to check the output of your code. 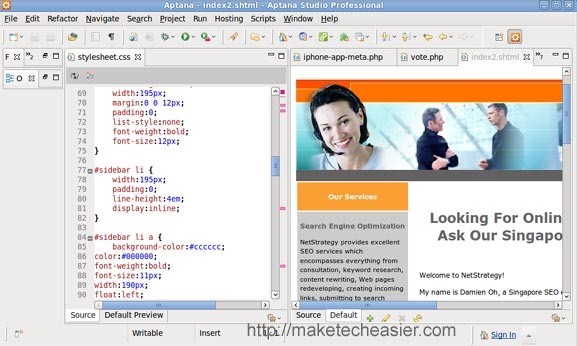 There are still many other features in Aptana, such as Cloud hosting, FTP/SFTP support, inbuilt Web server, AJAX server, that I did not mention, either because I have no use for them or I have not tried them out yet. However, for those things that I have used , I must say that I am pretty impress with it.

One thing though, the installation in Ubuntu is not as straightforward as expected. I did spend some time before I can get it to work. In my next tutorial, I will go through the steps to install Aptana on Ubuntu 8.10.

Have you tried Aptana? Do you love it? Share with us in the comments.

9 Portable Apps for Windows that You Need in Your Pocket
8 Safe Websites for Downloading Windows Software
7-Zip vs WinRAR vs WinZIP: The Best Tool for File Compression
5 Best Python IDEs You Can Get in 2019
20 Wonderful and Lesser-Known Software of 2018
4 of the Best Alternatives to Skype on Linux
5 of the Best Linux Educational Software and Games for Kids
7 of the Best Free Graphics Editors for Creating Vector Images