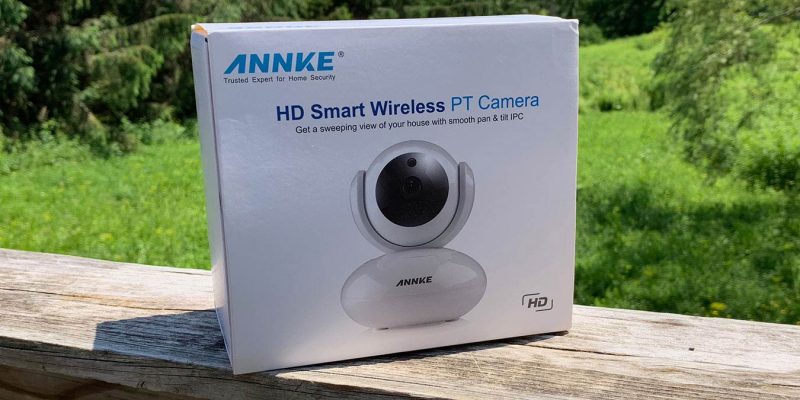 This is a sponsored article and was made possible by Annke. The actual contents and opinions are the sole views of the author who maintains editorial independence, even when a post is sponsored.

Home cameras used to be expensive and complicated. It didn’t matter whether they were meant for security or other purposes. Either way, they were mainly used by the rich, the paranoid, or both.

We’ve come a long way. Not only have cameras gotten smaller and cheaper in general, but Wi-Fi makes it much easier to put them anywhere you want. The Annke 1080P IP Camera is a Wi-Fi camera that you can control from anywhere with just your phone, and it’s surprisingly affordable.

For a limited time, you can get the Annke camera at 40% off by using the code VAVQKQ46. This discount will be available until July 31 at 11:59 PM PDT.

This is an indoor camera, meaning it’s not weatherproof. Still, the viewing angle is adjustable, either manually or by using the app, so if you set it up near a window, you could probably capture outside activity just fine. In case you’re trying to see if racoons are getting into your garbage at night or if it’s actually your neighbor, the camera also has night vision with a range of twenty feet.

The camera has a 3.5 mm lens, and as the name implies, shoots up to 1080P footage. The bitrate is variable from a bandwidth and storage-friendly 32 Kbps to a higher-quality 8 Mbps. The night vision is powered by six infrared LEDs.

Connectivity options is where the Annke 1080P IP Camera really tends to shine. It offers integration with Amazon Alexa plus optional cloud storage support. It can also alert you when it detects any motion, using an app on your smartphone. This means you can use it to keep an eye on what’s happening inside your home when you’re not there.

When you open the box, you’ll find more than just the camera. You also get a mount, an Ethernet cable, power supply, USB cable, and the manual. Reading the manual, you’ll find there are a few ways you can set up the camera.

If you can manage it, plugging the camera into your router with the included Ethernet cable is the easiest way to get set up. The other method plays audio from your phone, and this works fine but is more prone to interruptions or interference. Either way, you’ll need to download the Myannke app (Android, iOS) to your phone for the setup process.

First, the app will have you set up an Annke account to tie together multiple devices if you have them, and then you need to set the camera up with your Wi-Fi information. After this you set a password for the camera, give it a nickname, and pick the time zone you’re in.

Once you’ve finished the initial setup, you can unplug the Ethernet cable. Move the camera to your desired location (as long as it’s within Wi-Fi range), and plug it in.

The main way to interact with the camera is with the Myannke app. If you’ve never used this type of camera before, one of the most fun aspects is controlling where the camera is aimed. You can rotate it as well as shift the angle up and down simply by swiping around the screen. This is intuitive when it comes to control and lets you aim the camera with ease.

You can use the camera without any sort of storage, but it has a micro SD card slot. As mentioned above, you can adjust the bitrate of captured video to optimize for quality, storage space, or a balance of both.

This camera only supports 2.4 GHz Wi-Fi, not the 5 GHz frequency commonly used for faster speeds and lower interference these days. Given the lower price point, this makes sense, but I’ve frequently had issues with 2.4 GHz and my router. As a result, my best bet was to use the camera plugged in via the Ethernet port.

Plugged in, I had zero issues with the camera, with the cameras video feed subject to just a short delay. Only standing in the same room and waving at the camera while watching the feed on my phone could I detect the delay.

In daytime mode the picture quality is comparable to what you’d expect from a webcam. It’s not beautiful, but it’s not meant to be. It’s meant to be functional, and the camera absolutely delivers in that respect.

The infrared night vision mode seems to be where the Annke really shines. Whether you want to keep an eye on your backyard or see what your cats are up to at night, this camera will catch it. Details are easy to make out and the picture quality seems superior to the daytime mode.

While the camera can record to an optional memory card, you can also capture from your phone. You can capture snapshots and video recordings to your phone, with or without audio in the case of video.

The only real negative of this camera is that it is limited to 2.4 GHz Wi-Fi. If it had support for 802.11ac on the 5 GHz band, it would be a phenomenal deal for the price. Even with the Wi-Fi limitation, I still walked away with an extremely positive opinion of the Annke 1080P IP Camera.

I imagine most people buying this camera plan to set it up in one place and leave it be. If that’s the case, I’d recommend running a wired Ethernet connection to it if at all possible. Yes, it’s less convenient, but the stability of the connection would make it worth the effort. If you plan to move the camera from time to time, stick to Wi-Fi.

Considering the price is under $50, what you’re getting for the money is an impressive deal. There are smarter, more capable IP cameras on the market, but you’re going to pay a lot more for most of them.

For a limited time, you can get the Annke camera at 40% off by using the code VAVQKQ46. This discount will be available until July 31 at 11:59 PM PDT.