Our last review on Ubuntu Tweak was close to four years back and many updates were included in this wonderful software. With every new Ubuntu release, this Ubuntu Tweak software also updates itself to remove obsolete items and add in more tweaks. At version 0.7.1, this is already the most useful tweak software you ever need for Ubuntu. Let check it out, again.

For those who are not aware, or have not heard of Ubuntu Tweak, it is a third-party software that contains plenty of tweaks for the Ubuntu system. It supports the Unity desktop, Unity 2D as well as Gnome Shell.

To install Ubuntu Tweak, simply click here, or type in the terminal:

Alternatively, you can search for it in the Ubuntu Software Center.

To start Ubuntu Tweak, simply click the launcher in the Application list. The first window to greet you is the System and Hardware Information. 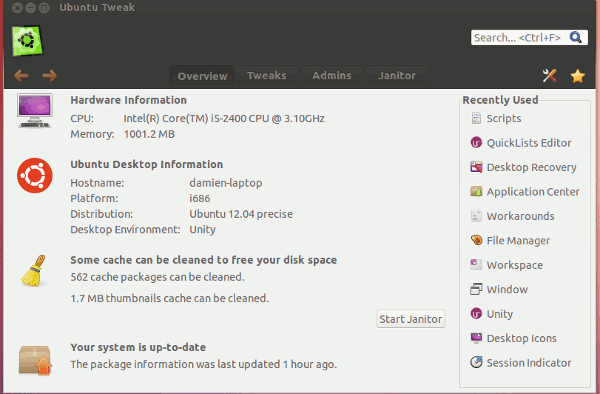 From here, you can see the amount of cache used in your system and a “Janitor” button that you can click on to quickly clean the cache and recover the space. In addition, it also shows if your system is up-to-date or requires update.

It is pretty basic in this Overview tab, but don’t be fooled by it. More things to come in the next few tabs.

On the “Tweaks” tab, you will find plenty of tweak options. From the Fonts, Sound, Theme, Login Settings to the File Manager, you will be overwhelmed by the number of tweak options it has in one single window. 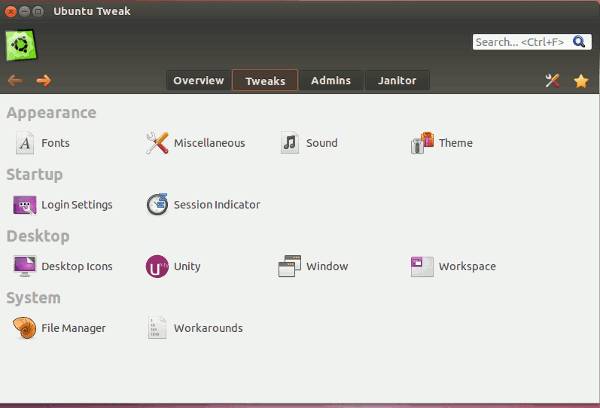 Some of the useful sections include Miscellaneous where you can enable/disable the menu and button icons, printing, Fast User Switching and even change the mouse scrolling to natural scrolling mode (scroll the mouse wheel up to move down the page, and vice versa). 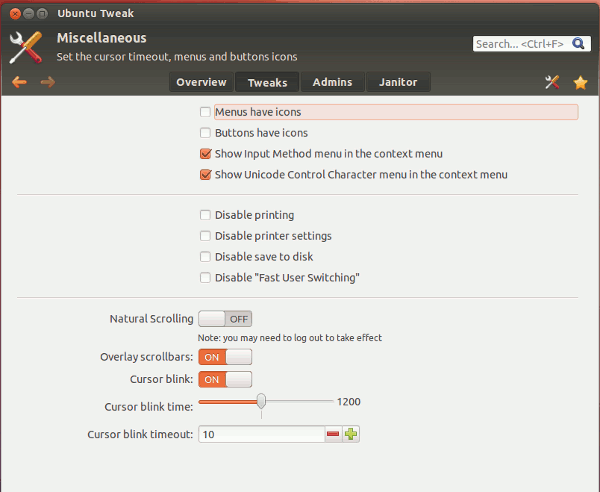 If you are using the Unity desktop, the Unity section is the most important tweaks that you should take note of. In here, you can enable/disable the HUD (a new feature in Ubuntu 12.04) and whether to add a “Show Desktop” icon in the launcher. You can also set the launcher icon size, opacity and whether to autohide when inactive. 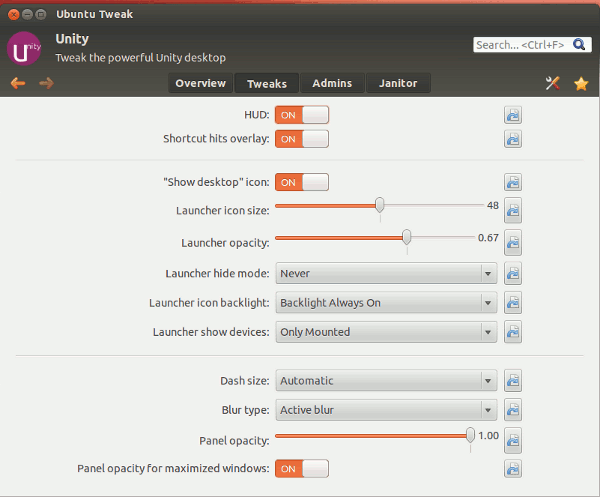 In the Workspace section, you can add/remove workspace and even add actions to the screen corners. 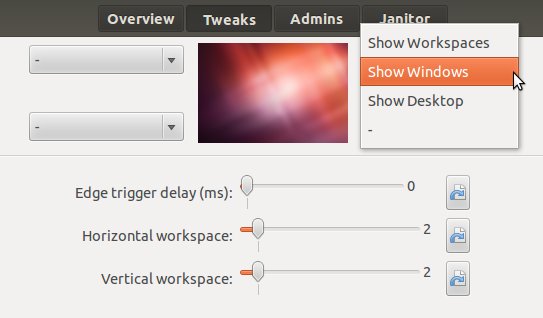 The Admin tab contains all the tweaks relating to maintenance and administrative tasks. You can manage the applications (install/remove), backup your Desktop settings, and if you are experienced enough, create your own quicklist with the QuickLists Editor. 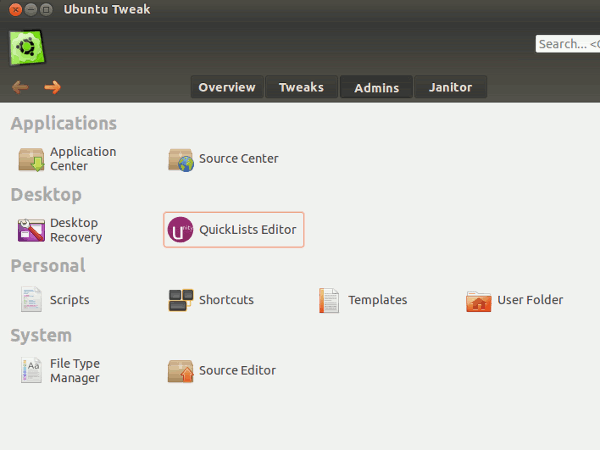 Lastly, the Janitor tab is where you can clean up your system to recover precious storage space and make it runs faster and better.

While most of the tweaks in Ubuntu Tweak are already available in Ubuntu, most of them are scattered everywhere and some are even hidden from the public eyes. Ubuntu Tweak has done a great job in linking them together all in one place and in addition, added extra features to make it the best tweak tool out there. If you need to customize the Unity desktop, this is the one and only tweak tool you ever need.