Welcome to the exciting world of the modern home theater! A number of people have decided to ditch their television sets and replace it with a digital light processing (DLP) projector. The reasons vary, but it’s become the ideal choice for home theater systems around the world. If you’re reading this, it probably means that you, too, are looking to purchase your own projector. Before you go out and open your wallet, there are a few things you should take into consideration.

Would You Actually Benefit From a DLP System?

First things first: take some time to actually think about whether you actually want a DLP projector. They’re lightweight and unrestricted, sure, but are you certain that once you take the plunge, you won’t regret this decision? DLP projectors are expensive, require equally expensive lamp replacements once in awhile (frequency depends entirely on the projector itself and how you use it), and don’t necessarily “fit” everywhere.

Now, why did I use the word “fit” when talking about something as compact as a projector? I’m glad you asked! DLP projectors require a certain amount of wall or screen space in order to properly project an image. Sure, you can make a projector display an image on a smaller surface by moving it closer, but the logistics get a little iffy when you consider the fact that sometimes you may have to move it close enough to the wall for the projector to become an obstruction rather than a convenience in your viewing experience. Similarly, your “display size” will be limited if you’re trying to use it in a very small room. You can’t just put a projector anywhere.

To use a DLP projector, you need:

Does that sound too inconvenient for you? Perhaps a nice curved TV set might be your kind of deal.

Hold your horses! Just because it’s advertised as “full HD” or “1080p” (even “4K” with newer models) doesn’t mean that it will actually show you a clearly high-definition image. Yes, a projector that is advertised as a “1080p projector” will support a 1080p resolution format signal, but that’s all it means. If you want to see what kind of resolution you will actually get from your projector, check out its native resolution.

The native resolution specification will tell you how many physical pixels the device actually has. Take, for example, a BenQ TW523p on sale in my country. It’s roughly $500, supports a whopping 1600×1200 resolution (great for that price), but it has a native resolution of 1280×800. The final image on that projector will be downscaled to nearly 2/3 of the image’s signal resolution. I’ll be seeing about 70 percent of my film’s quality (assuming it’s a 1600×1200 “16:10” film).

Take a moment to look at a really cheap projector. Examine how the image is displayed. Do you notice some colorful artifacts around certain frames? That’s called the “rainbow effect”, and it’s the result of a color wheel that doesn’t spin fast enough. Most modern projectors have eliminated this issue, but you should be aware that there are still some of them out there that will give you a disappointing experience. If you’re curious to see what the rainbow effect looks like, have a look at this video: 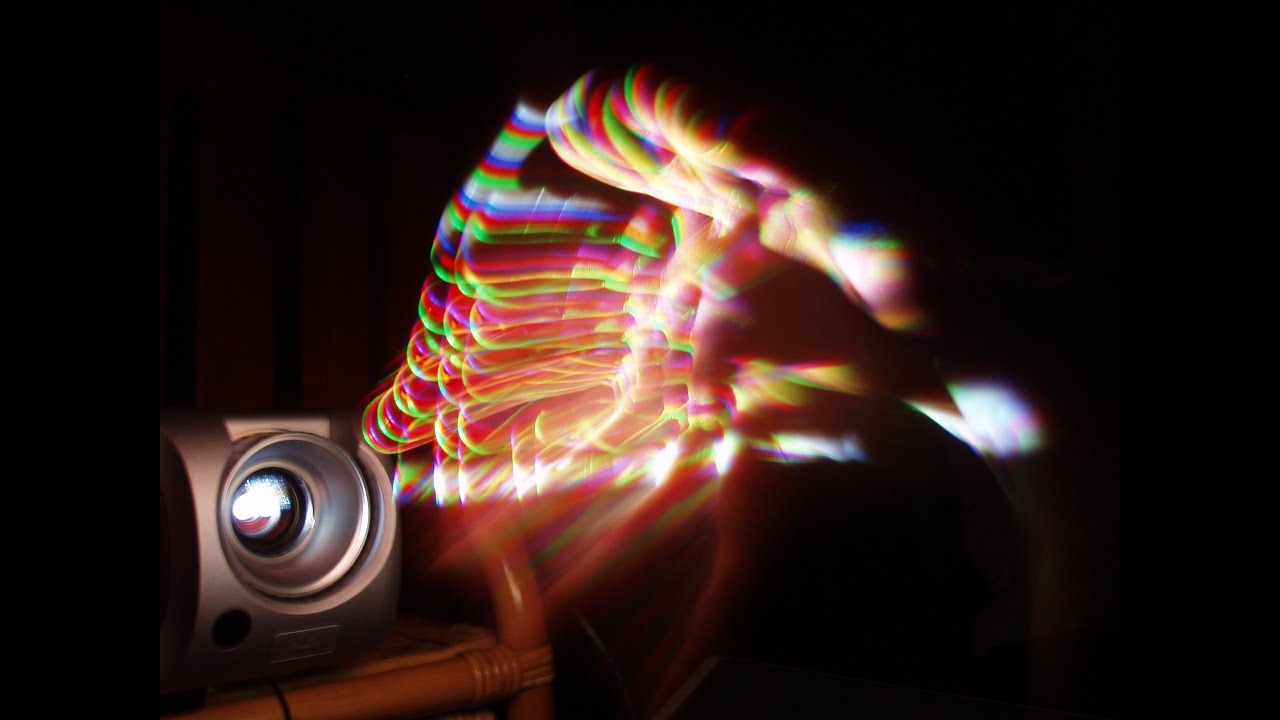 Horrible, isn’t it? It almost makes the film unwatchable. My advice to you is that you should never buy a projector that you have not tested beforehand. In fact, you should always do this with any electronic device. Seriously though, don’t let anyone prevent you from spending some quality time with something you’re about to shell out well over $1,000 on.

What Are You Using the Projector for?

Before you ever walk into a store, you must have already decided what purpose your projector will serve. Do you need to carry it everywhere you go? Are you going to make business presentations with it? Is it going to be used as an “extra monitor,” or are you going to use it strictly for multimedia?

If you need a portable projector, get a good pocket projector, preferably one with Bluetooth or some kind of peripheral connection that works with your smartphone.

For business presentations that don’t have animated images, don’t dish out cash for an extremely expensive one with all the bells and whistles. All you need is a projector that won’t die after a couple of uses, even if its frame rate is very low.

For computer junkies that want to use the DLP as an extra display, I recommend getting the best thing your money can buy. Low frame rates will be irritating. The rainbow effect will distract you. Almost everything about a cheap projector will render it useless for your computer. Don’t invest a penny less than you should. For strict multimedia purposes, anything with a frame rate above 24 works just fine. Since most films are published in a 16:9 aspect ratio, make sure your projector has the same ratio.

How Will Your Media Room be Lit?

Do you want your projector to work even in acceptable lighting conditions? Then you can’t just get any DLP. You need one packed with lumens (a unit that measures light). Otherwise, you’ll have to turn off all your lights to view something.

Generally, you want a projector that has many more lumens than the lights in your room. For reference, one 60-watt light bulb measures roughly 800 lumens. If you plan to turn off the lights to watch a film, this doesn’t apply (in other words, feel free to buy whatever captures your heart).

A Word on Throw Ratios

Projectors work by “throwing” light at a surface. Whatever light bounces off enters your eyes. The ratio at which it can produce a certain size of image from a particular distance is called a “throw ratio”. This specifically has to do with the lens and how it is angled. Projectors with a high throw ratio need to be moved further from a wall or screen in order to project the same size of image as a projector with a low throw ratio.

In case the logistics are fuzzy, here’s a scenario: Let’s say you want an image that measures 10 feet wide and you want to sit the projector 15 feet away from the wall. To get the projector to project that exact size image while sitting at that exact distance, you need one with a throw ratio of 1.5. The throw ratio is the proportion between distance and screen width.

To determine the exact ratio you need, calculate the size of your room, then calculate how much available screen space you actually want to take up. Determine how far you want the projector to sit from the screen, then divide that by the screen size and round it up to the nearest tenth-place decimal. Bam! There’s your throw ratio.

Let’s run that by an actual scenario. Let’s say I have a 20×20-foot room. I want a screen that measures 12 feet, and I want to sit the projector about 19 feet away from the screen. 19/12 = 1.5833333333. My ideal throw ratio is 1.6 (if I don’t mind a slightly smaller screen) or 1.5 (if I don’t mind putting the projector just a little bit closer to get my ideal 12-foot screen width). If you want a projector that can be used in almost any situation, get one with an adjustable lens. Those are pretty expensive, though!

That’s about all I have to say about projectors! If you feel like adding something from your own personal experience or asking a question, feel free to leave a comment below!

How to Easily Get Hardware Information About Your Linux PC

How to Find Out How Much Hard Drive Space You Need

Bitdefender BOX: Complete Security for All Your Devices

MTE Explains: The Difference Between a CPU and a GPU

MTE Explains: What Is a Processor's Process Size and Why Does It Matter?