Spotify is an awesome on-demand music player for users of Mac OS X, Linux, and Windows (and hey, if you’re a BSD or Haiku user, why not work on porting it?). One of its cool features is the ability to install plugins, also known as “apps” in Spotify-land. Today I’m going to round up six cool Spotify apps I’ve discovered through my usage.

To install any of these apps, just go to the App Finder section on the left-side menu: 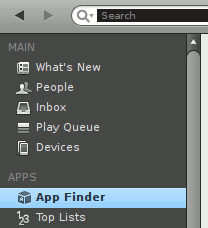 Any karaoke fans in the house? TuneWiki displays the lyrics to the song you’re currently playing and scrolls through them in real-time. If no one has synced the lyrics to that particular song yet, TuneWiki gives you the option to sync them yourself (hence the “wiki” concept). 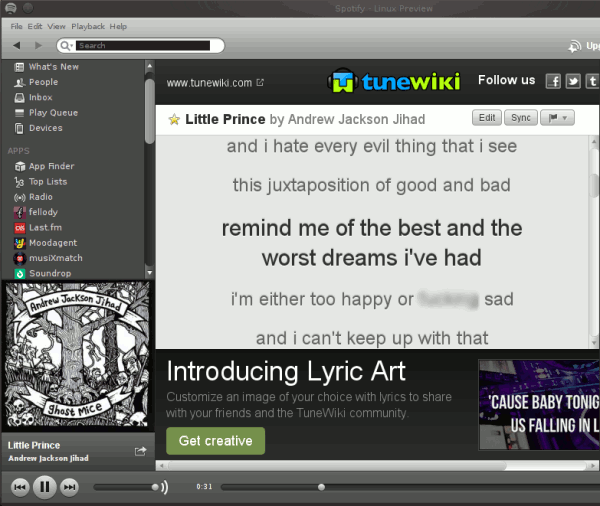 I don’t see any significant differences between TuneWiki and MusiXmatch except that (A) TuneWiki is more popular, and (B) MusiXmatch seems to have more lyrics available for the assorted music tests I’ve put it through. This varied, though; for example, TuneWiki was more keen on Leonard Cohen’s lyrics than MusiXmatch was. Oh, and MusiXmatch automatically features artist photographs in the background of the lyrics display. Like TuneWiki, MusiXmatch gives you to option to sync lyrics that aren’t already synced, as in the screenshot below. 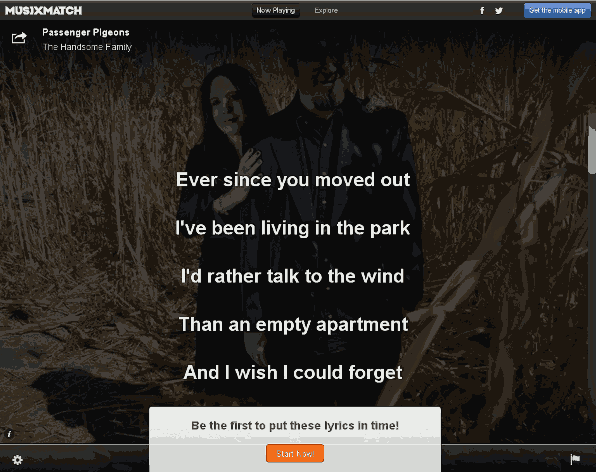 Last.fm is a wonderful music service unto itself, dedicated to tracking your music listening habits and suggesting related music. The Spotify app for Last.fm lets you “scrobble” – the Last.fm term for recording the tracks you listen to – and access most other features of Last.fm, such as artist information and similar artist recommendations, straight from the Spotify interface. To get the most out of this app, you should make a Last.fm account. 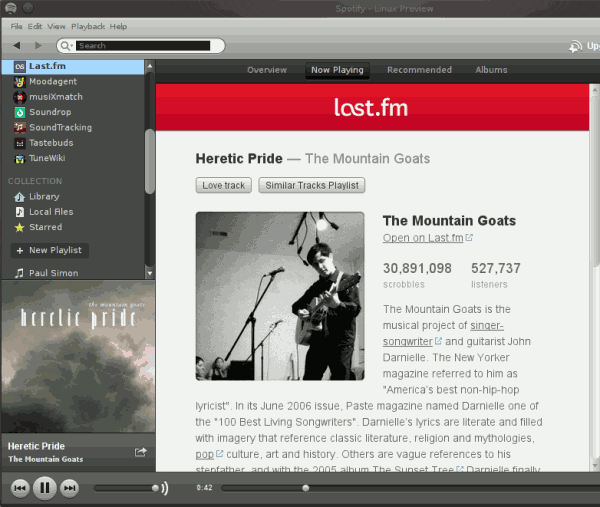 Moodagent is a mood-dependent playlist generator. It’s great if you just so happen to be in a sensual, tender, happy, or angry mood, as those are the four pre-defined moods you can click on. Alternatively, you can enter a song of your choice into the search bar and find other music that matches its mood. Moodagent will also recommend recent songs you’ve listened to that are popular enough to have gathered playlist data. 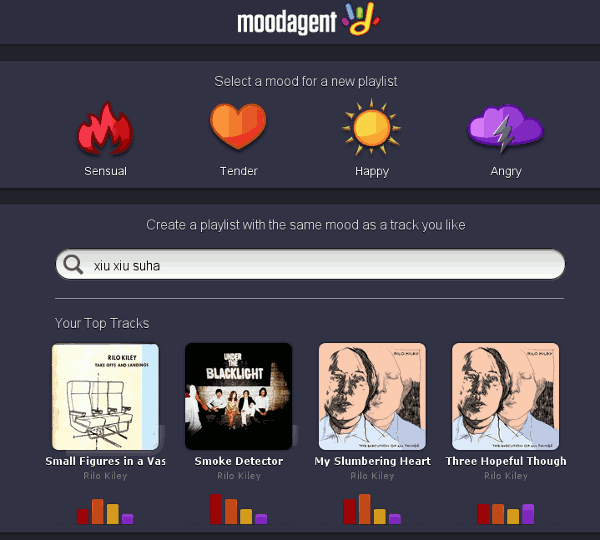 The results screen gives you a playlist along with the ability to manipulate the five-factor control curve. This lets you base the generated playlist on Moodagent’s assessment of your base song’s sensuality, tenderness, happiness, angriness, and tempo. 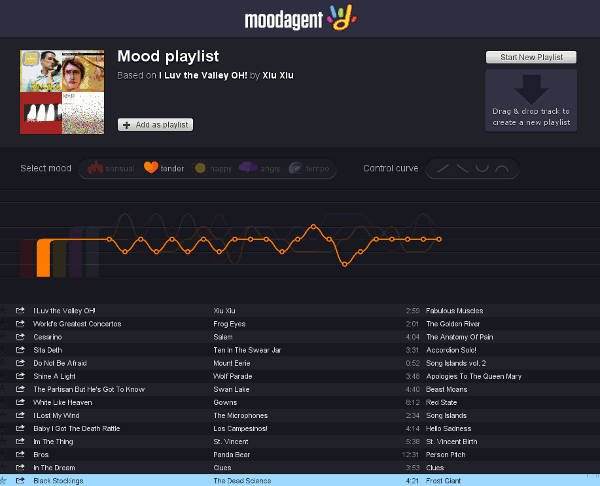 So how did it do? Pretty well, I thought, though it didn’t have data for all of the songs I tried it with. I don’t know exactly how their algorithm works except that it takes into account your starred songs, top tracks, and current playlists as a starting point for gauging your tastes.

Tastebuds is a social app for meeting people in your area with similar music tastes. To get started, scan your library: 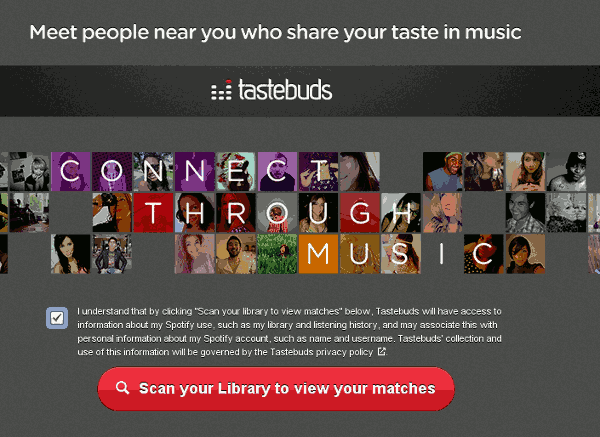 Next Tastebuds will present you with your matches, which you can filter by age, gender, and location. 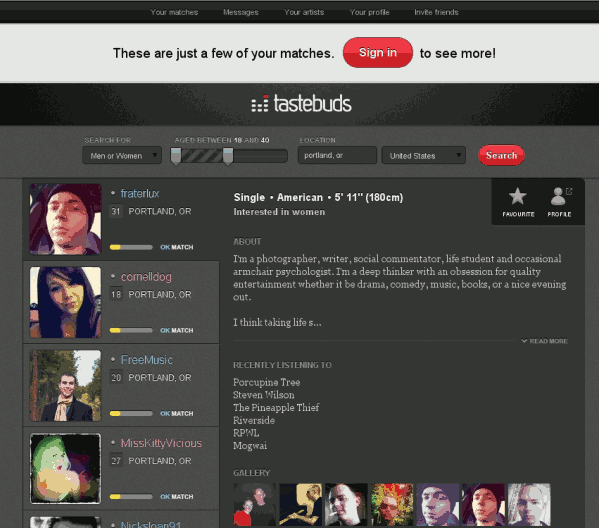 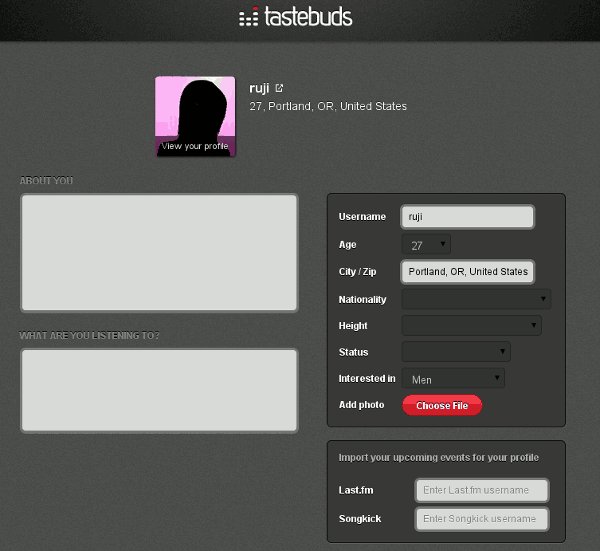 I found the interface a little buggy at times. For instance, I would try to type information into the form fields, but no characters would show up. This may be a bug in my version of Spotify, though, which is the beta for Linux.

Tastebuds presented me with an impressive number of matches in my area, proving that it has an active userbase. If you’re rebounding from an epic breakup or just looking for some new friends in your area, this is a nice alternative to traditional online dating and meetup services.

Songkick has a simple goal: To show you upcoming concerts by the artists you listen to. 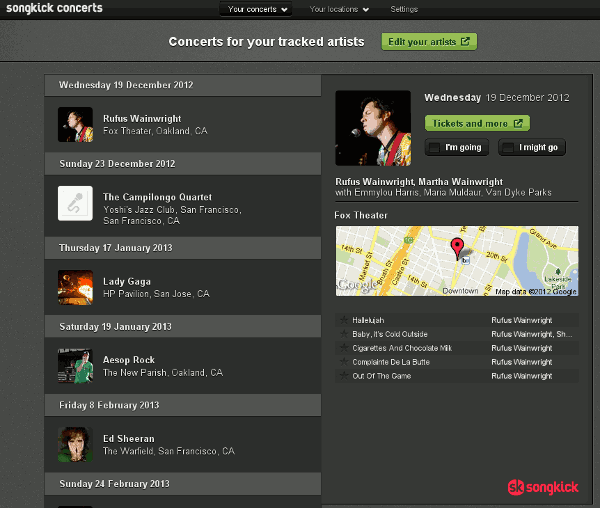 By default, it seems to only show mainstream artists on your front page, but you can log in at the Songkick website to edit your tracked artists if you’d like to switch the focus.

Did we miss your favorite Spotify app? Which ones do you use?