Command + M minimizes any given window in OS X’s Finder, but getting the window back from the dock is a different story. Unfortunately, Finder’s poor management of “un-minimizing” a window is maddeningly inconsistent and seemingly an obvious omission given the importance of such a feature. Here are five ways to un-minimize windows in OS X.

Press Control + F3 (If you are on a laptop you’ll need to hold the Fn key as well) to highlight the Dock. You can then use the arrow keys to navigate to the Window you want to un-minimize and press Enter. This is the best free and native solution, but it is a little clumsy (especially on laptops) and potentially involves a lot of keystrokes if you have a large Dock.

Press Command + Space to bring up Spotlight. Type the name of the Application you want to bring back from the dock and highlight the name of the app under the “Applications” header and press Enter (often it will also be the “Top Hit”). Note that this only seems to work consistently with Apple Apps (iTunes, Mail, etc.). Third-party app support for this method is inconsistent- for example with Firefox it will only un-minimize the last window you minimized.

Press Command + Tab to bring up the application-switch box. Command-Tab to the application you want, and before you release the Command button, hold Option. Release both keys. This method will only open the last window you minimized, and support for third-party apps is inconsistent.

The default for entering a command is Control + Space, after which you type in the name of the Application you want to un-minimize. Again this has its limitations- there is no option to choose which window you want to open and it only un-minimizes the last window you minimized. 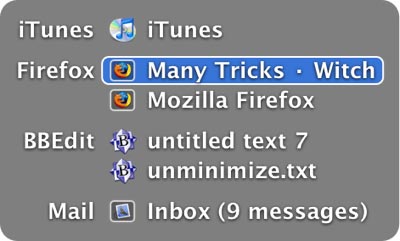 The best solution is unfortunately not freeware, but if you really want to put this issue to rest, Witch from ManyTricks (the same developers that brought you Name Mangler) is by far the best solution. Witch is like Command-Tab but for windows instead of applications, and can cycle between all the windows you might have minimized at a given time regardless of what Application they belong to. While we don’t usually recommend non-freeware programs, the $16 cost is well worth it if you use a lot of windows and don’t like to leave your keyboard.

Do you have any other ways of un-minimizing a window once it’s trapped in the Dock? Leave a comment!

How to Add a Trusted Phone Number to Your Apple ID
Why Are Apple’s Butterfly Keyboards So Bad?
How to Open Any Folder in Finder from Mac Terminal
How To Set a Do Not Disturb Keyboard Shortcut on Your Mac
Apple Announces iPadOS, a New Mac Pro, Dark Mode, and More
How to Locate and Delete Duplicate Files on macOS
How to Fix Mac Error Code 43
Apple’s Macbook Keyboard Issues – Which Models Are Affected?