People who play around with Windows are often bound to find something that’s out of balance; something that usually strikes people as odd because of the way Windows is functioning. Microsoft has been an aide to this phenomenon by implementing (perhaps purposely) some Easter eggs within some programs in its operating system. Like a good ghost story, these legendary little anomalies within the operating system make up a part of its culture. Let’s have a look at instances when Windows starts acting weird in ways that are completely reproducible!

1. Microsoft Word Fills Its Pages Up For You

Sometimes, programmers either accidentally or purposely leave behind some code that they used to test a program. Microsoft Word has a little quirk where you type in a string and it just fills up its pages with information about the program. I have no idea if this was left on purpose, but the results of it are very interesting. To see what we’re talking about, type

as shown in the picture below.

Once you press “Enter,” you get this:

Kind of weird, right? What you see is a very large amount of instructional text regarding functions found within Microsoft Word. This is possible through MSWord 2007 and 2010. I don’t know if it’s possible in earlier versions or in the upcoming Microsoft Word 2013.

In Windows XP, Microsoft left behind a hidden debug menu by accident that allowed people to instantly win any Solitaire game or Free Cell. I don’t know why you would do that, but if you want to see how each game performs its crazy little animation, you need only press “Alt + Shift + 2” in Solitaire and “Ctrl + Shift + F10”  in Free Cell. The games will show their finishing animations and then you can play again.

Once Microsoft got wind of this problem, it was removed in Vista and later. You can still read this guide on how to get around it, though, even on Windows 7.

Again in Windows XP, Notepad tends to act crazy. Type “Bush hid the facts” in Notepad, save it, and then open the file again. Funny, isn’t it? You’ll either get a large amount of strange characters or a bunch of boxes. This phenomenon is completely coincidental and is known as a “mojibake.” This happens when an operating system fails to properly determine the encoding on a string of text (Unicode vs. ANSI). If you don’t have XP, you can still watch a video of this phenomenon: 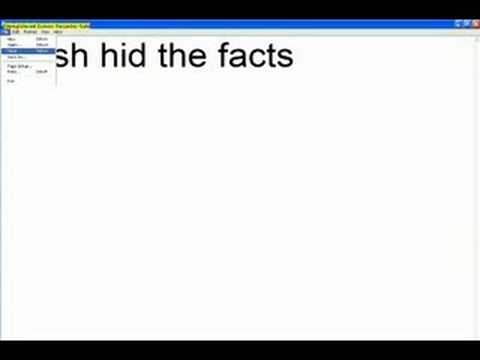 Your calculator, by the way, has a mind of its own sometimes. Try getting the square root of 4, and then subtracting it by 2. You get something like this:

Was the programmer who developed Microsoft Calculator drunk? Probably not! It must be a bug that happens because the result comes as part of a square root operation equaling zero. Try the square root of 16, and then subtract it by 4. Here’s what I get:

5. Your Folders Can’t Have Certain Names

Besides the usual suspects, there are some combinations of characters that Microsoft won’t allow you to name your folders. Try naming a folder “con.” You’ll get an error like this:

Doing this to a file achieves the same result. Also, you get the same error when giving files and folders any of these names: PRN, LPT1 to LPT9, NUL, and COM1 to COM9.

I think I pretty much covered everything I’ve discovered in Windows XP and up. Let’s hear from you what you’ve found in any other version of Windows. It would be interesting to hear legendary bugs from ’95 and ’98.

How to Use Google Authenticator on a Windows PC

How to Undervolt Your CPU with Throttlestop in Windows

How to View Network Adapter Details in Windows

How to Fix Copy and Paste Not Working in Windows

How to Check Whether a USB Drive Is Bootable in Windows

10 of the Best Windows App Docks