As we welcome in a new year that many are saying will finally be “the year of the Linux desktop,” we want to take a look at some of the up-and-coming Linux distros for 2013. The mainstream tech media has already covered distro giants like Mint and Ubuntu in great depth and breadth, so we won’t reiterate what you’ve already heard a kazillion times. Read on to learn about some newer distros that we expect to continue rising in popularity, maybe even to the level of stardom, over the year.

Note: This list of Linux distros is not in any particular order, and it is not intended to be exhaustive. If you want an exhaustive list of popular new distros, check out DistroWatch for the latest news and stats. 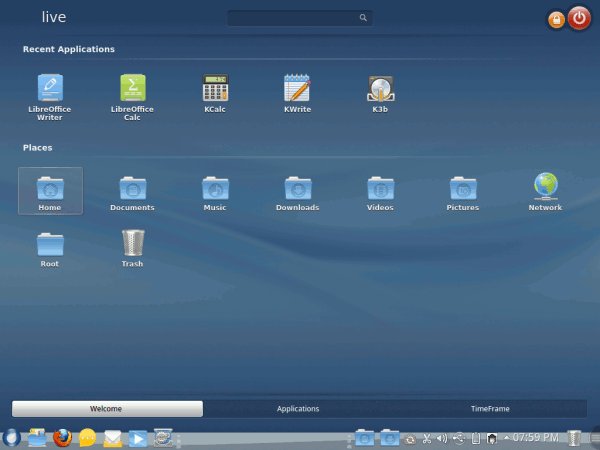 While the commercially driven Mandriva has been struggling over the past few years, two new Mandriva-based distros have been on the rise. ROSA is one of them. It is a general-purpose distro from Russia that uses a customized take on KDE and many other modifications to improve the end-user experience. It is becoming known for both its “Desktop Fresh” edition and its server edition, ROSA Enterprise Linux Server, which is based on Red Hat rather than Mandriva.

ROSA 2012, released in December, brings back much of the code of Mandriva 2011. It has a friendly, colorful theme with chunky icons, making it appealing to those who care about aesthetics in a desktop. One of its interesting customizations of KDE is the large, GNOME-like pop-up menu shown in the screenshot above. The menu has three tabs, “Welcome,” “Applications,” and “TimeFrame.” TimeFrame lets you log into your social networks, though it appears to only support two right now. 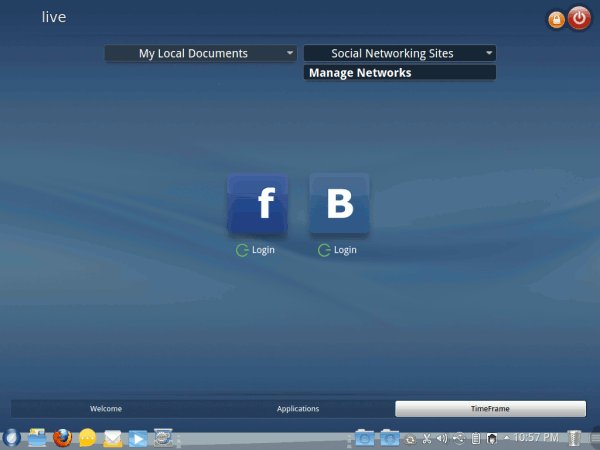 I managed to log in to Facebook with TimeFrame, but the Facebook app itself wouldn’t load. I love the idea, though; if ROSA added some more social networks and fixed the bugs, this would be a great feature. 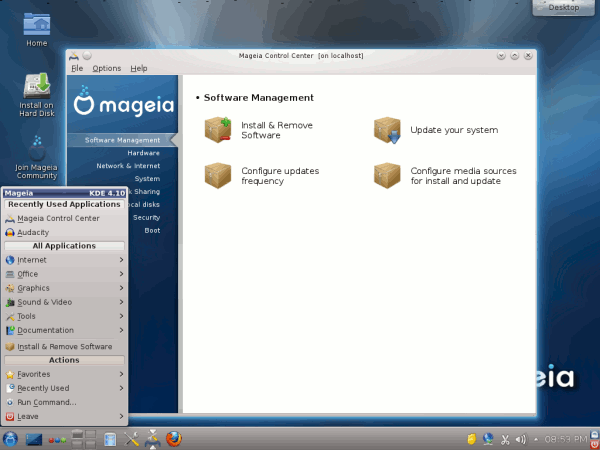 Mageia is the other Mandriva fork that’s been doing great – really great, in fact. It has already surpassed Ubuntu in popularity on DistroWatch. Mageia is essentially a non-profit, community-driven variation of Mandriva. Mageia 2 is the stable version, but I decided to test the beta for Mageia 3.

I was pleased to see that Mageia provides more advanced graphics and audio applications than most general-purpose distros, including GIMP and Ardour. The look and feel is fairly typical of KDE’s Oxygen. Mageia features its own Control Center in addition to the standard KDE System Settings. 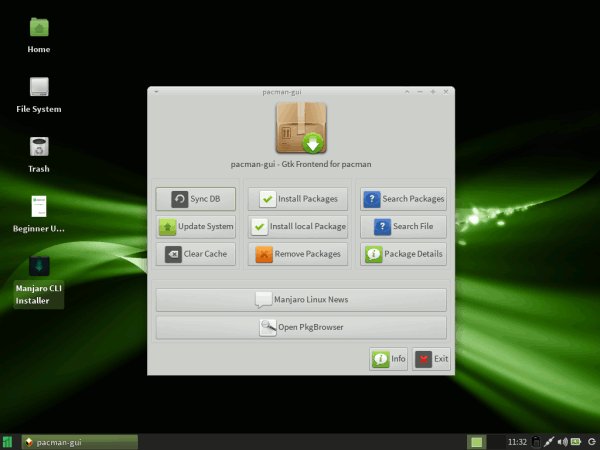 Manjaro is an Arch-based, desktop-oriented distribution that aims to make Arch more approachable while operating under the K.I.S.S. (Keep It Simple, Stupid) principle. Manjaro is light and fast and 100% compatible with Arch, though Manjaro also uses its own repository called BoxIt.

I tried the Xfce edition, which is the most widely used, and my experience was great. The slick Greenbird theme goes well with the Faenza icon set, and the green desktop colors are pleasing to the eye. Manjaro comes with two graphical applications for browsing packages. While it doesn’t provide an office suite, it does come with an installer for LibreOffice. 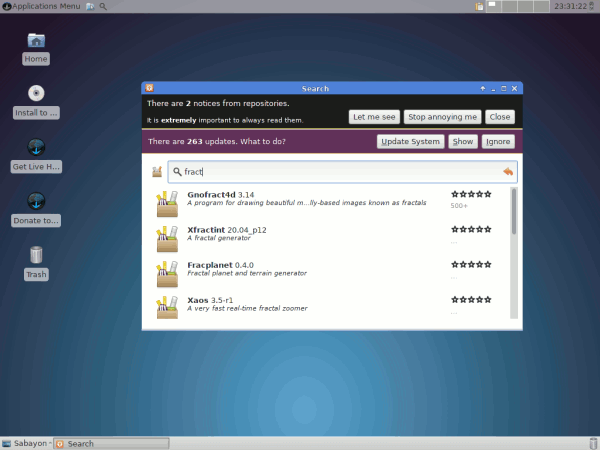 Like Manjaro, Sabayon‘s goal is to create a user-friendly distro on top of an advanced distro’s base. In this case, Sabayon is based on Gentoo, with the main difference, other than the fact that Sabayon has an installer, being that Sabayon uses the binary package manager Entropy to compile all packages from source instead of the portage package manager. You can use portage in Sabayon too, but mixing portage and Entropy is not recommended unless you’re sure you know what you’re doing.

Sabayon includes a fast graphical frontend for Entropy called Rigo Application Browser. You can also install packages with the equo command, but Rigo is a nice addition that makes the distro more beginner-friendly. I have used Sabayon for years and am increasingly impressed with every release. 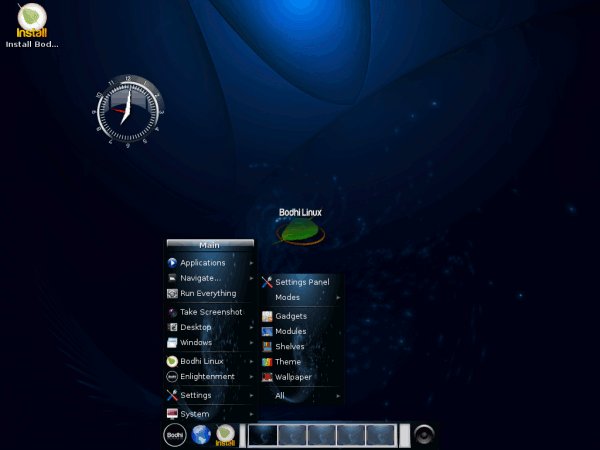 Bodhi is a lightweight, minimal desktop distro known as “The Enlightened Linux Distribution” because it runs the Enlightenment (E17) desktop environment. It is based on Ubuntu. If you haven’t tried E17 before, I highly recommend giving it a go with Bodhi. Bodhi has streamlined the experience very nicely. When you first boot up into the live edition, you’ll get a dialog asking you to choose a theme: 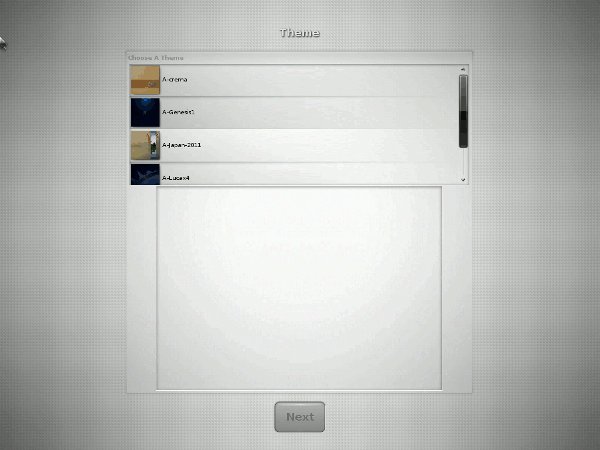 Bodhi is quite stable, as each release is based on a corresponding LTS (long-term support) Ubuntu release. The latest, Bodhi 2.1.0, is based on Ubuntu 12.04. It doesn’t come with a whole lot of preinstalled software; rather, Bodhi aims to give the user control over installing the software they want. For this reason, it might not be the best choice for someone who has never used Linux before, but for other use cases, Bodhi is a fine choice.

There are so many interesting, nascent Linux distros that it would be impossible to cover all of the best ones in a short article like this. I can at least testify that I played around with each of the distros described here and found them all very solid. I don’t necessarily expect any of them to surpass Mint in popularity in 2013, but do keep an eye on them. ROSA, Mageia, Manjaro, Sabayon, and Bodhi are all in active development and steadily improving.

Have you tried any of these Linux distros? Which up-and-coming distros would you recommend to us?