It is a known fact that Firefox is a memory monster. It consumes your memory like there is no tomorrow. Load up a few tabs and it starts to slow down (or even crash). This is also the main reason why many people are ditching Firefox for Google Chrome. If you are bothered by this memory issue, but are not able to switch to other browsers because of the heavy dependency on the extensions, here are another 4 extensions that can solve/reduce the memory issue and make you a happy Firefox user (hopefully) again.

Tabs is the most valuable features in all browsers, yet it is the one that consume the most memory in Firefox. Try to load 10 – 20 tabs and you see your system coming to a stand still. BarTab works by loading only the tabs that you are actively using. When a tab has been idle for a period of time, it will be automatically unloaded to free up memory space. The concept is, you pay (memory space) only what you are using.

When you restore a session with multiple tabs, you can also configure BarTab not to load all the tabs. The tab will only be loaded when it become active. 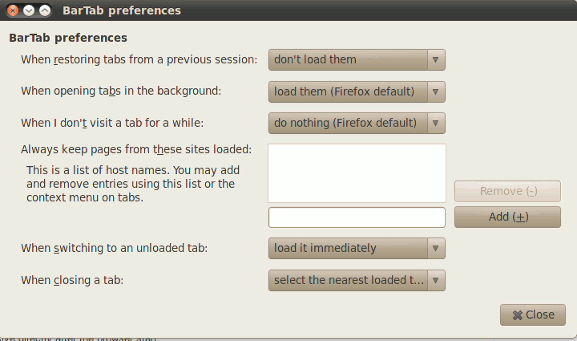 Memory Fox is a great extension that can provide dynamic ram memory recover and will attempt to reduce and provide retention as an application’s resource demand. It is a Windows only extension, and the best thing is, you can notice the differences immediately. The screenshot below shows the memory usage before and after memory fox is installed. There is an immediate drop of 50% of the memory used.

After the installation, you need to activate it via the menu Tools -> Memory Fox -> Activate Memory Fox. You should see an icon at the status bar after the activation.

Conceptually similar to BarTab, but functionally different, Load Tabs Progressively limits the number of tabs that can load concurrently. That means, when you restore a session of 20 tabs, only 3 tabs (or other number that you have configured in the Settings) will be loaded concurrently. Once the 3 tabs finished loading, the next 3 tabs will be loaded.

Unlike BarTab, LTP will load all the tabs, so this is useful for those who need all their tabs loaded when they open Firefox, but doesn’t want it to slow down the system.

Note: It seems that the Load Tabs Progressively extension does not play well with the NoScript extension. Be warned.

Not to be confused with Load Tabs Progressively, this extension only works when you use the “Reload all Tabs” function. When you reload all tabs, this extension will limit the number of tabs to load concurrently.

In other words, if you set “3” to the maximum number of reloading tabs and there is 4 tabs, “reload all tabs” command doesn’t reload the 4th tab and reload it after the first tab is completely loaded.

By creating a new Firefox profile and use that profile for your usual browsing will also reduce the memory usage. Thanks to Wallace for providing the tips.

To get the best out of both worlds, you can even run two instances of Firefox, each with a different profile (not the default profile). Share the loads between the two browsers to reduce the chances of the browser crashing. Two instances of Firefox from two profiles, each with 20 tabs open, causes much less thrashing than one instance with the same 40 tabs open. Idle memory usage will be higher with two instances, so it may only work well on systems with 1GB memory or more.

Note: To use multiple instances of Firefox concurrently, you will need to start the Firefox browser with the command

What other extensions/methods do you use to improve the memory usage in Firefox? For Chrome users, will these extensions pull you back to Firefox again? Hit it in the comments.

How to Safeguard Yourself from Malicious Browser Extensions
Three Ways to See a Password in Your Browser Instead of Dots
How to Install Firefox in Chromebook
New Firefox Update to Reduce Power Usage Up to Three Times on macOS
A Chrome User’s Guide for Switching to Firefox
7 of the Best Add-ons for Firefox for Android
Are Browser Extensions Slowing You Down?
How Do Internet Browsers Make Money?