Even to a refined aficionado, computer monitors are still a realm shrouded in smoke and mirrors. Manufacturers like to attach specs to their displays, which usually consist of numbers that give you the impression that “bigger is better.” When you buy a monitor, you’re purchasing a window into your computer. Without it, you’re (literally) running blind. Aside from its necessity, a monitor has more utility if it can display colors and video clips in a way that’s pleasant and easy on the eyes. The truth is that most people have no idea how they’re being duped into buying displays that throw fancy numbers at them. For this reason, I’ll point out the biggest myths revolving around these displays. 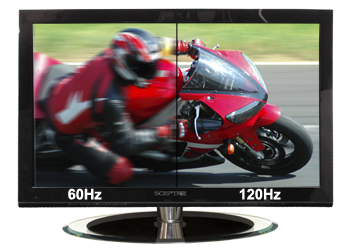 One of the latest selling points for monitors is their refresh rates. This is all fine and dandy, until you realize that most movies play at 24 frames per second. Either way, your eyes aren’t conditioned to notice the difference between a standard 60 Hz (on an LCD/LED monitor) and the new fancy 120 Hz rate. Want to try this out for yourself? Go to a computer hardware store and check out the demo monitors. They’re probably all running the same clip. Now, go up to a monitor with a 60 Hz refresh rate and then switch over to one at 120 Hz. Did you notice a difference? It’s likely that any difference you’ll see has to do with other aspects of the monitors (like other image processing hardware that removes motion blur from images). For best results, compare two monitors from the same brand and, if possible, the same product line.

The 60/120 Hz difference was noticeable back in the days of CRT monitors, which flickered at lower frequencies and tired your eyes. LCD/LED monitors do not suffer from this shortcoming. 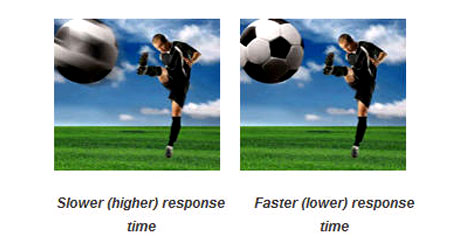 The response time of a monitor measures the amount of time it takes for a signal to be processed. So, if you perform an action (like moving your mouse), there will be a very tiny delay between your hand moving the cursor and the monitor actually displaying that movement. This time is measured in milliseconds.

Yes, it is better to have a 10 ms response time than a 30 ms one. If you try operating with a monitor that has a high response time, you’ll immediately notice the annoying delays in almost anything. This is especially present when you’re gaming. But your eyes also have a limited response time to changes in their environment, which is usually around 10 ms. Any response time on a monitor below 10 ms, in consequence, wouldn’t really affect you.

Myth #3: (Almost) Everything About Contrast Ratios 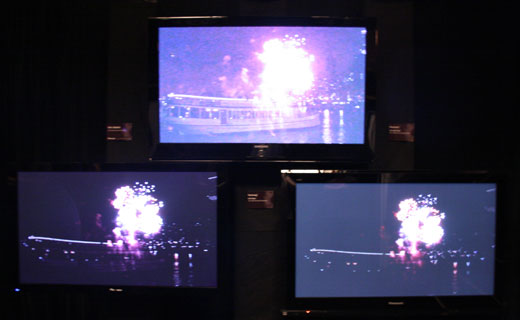 Throw away everything you’ve heard about contrast ratios from a sales rep. Most of it is garbage, for lack of a better word. If you’ve ever been enticed into buying a monitor with a 5,000,000:1 contrast ratio, put that money back in your pocket and read this. Most LCD monitors produce anywhere between 1000:1 and 1500:1 ratios.

Wait a minute… Do you know what a contrast ratio is?

Contrast ratios demonstrate the difference between black and white luminance on monitors. This means that monitors with high contrast ratios tend to have brighter whites and blacker blacks. In reality, there’s a lot that’s being done in this field to improve these ratios. However, you’ll have to test out a monitor for yourself to really see what it can do. Unfortunately, the contrast ratio on the box is just a formality that only shows the dynamic ratio, and dynamic ratio is just a fancy way of simulating darker blacks with mediocre effects.

Monitors with dynamic contrast will play dark scenes in movies horribly. Some objects that should be bright are instead darkened along with the rest of the background. Sometimes, it’s even worse, with entire scenes almost completely black.

If the monitor shows blacks and whites at near-perfection compared to your old one, and there’s no confusion when using black backgrounds, pull the money out of your pocket again and buy it. 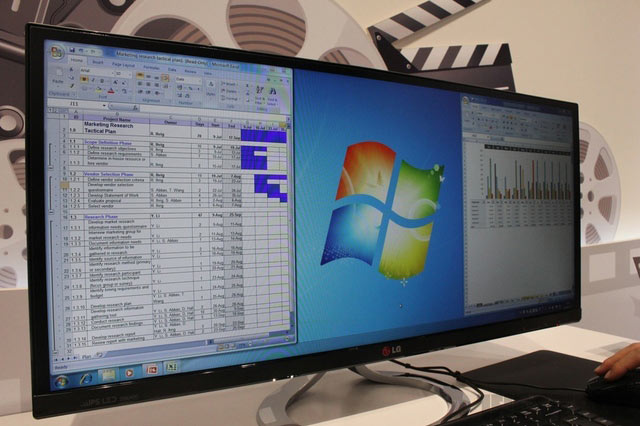 Who doesn’t like a big screen? If you can afford it, you’re tempted to buy it. But I’m advising you to grip your wallet tightly until you’re finished reading this. Most monitors (even high-end models) support a 1920×1080 resolution otherwise known as 1080p. By the time you get a screen larger than 27 inches, you will notice some pixelation. This is because there are not enough pixels in the resolution itself to produce a smooth image that runs through all pixels uniformly. It may be more noticeable as you sit closer to your monitor.

If you plan to buy a 30-inch screen, make sure it supports a resolution of 2048×1152. It’s still widescreen, and it’s called the quad wide extended graphics array (QWXGA), or . For enormous screens (like those you’d normally see at the Olympics), get one that supports a resolution of at least 2560×2048, also known as the quad super extended graphics array (QSXGA); or the latest resolution to hit shelves, known as 4K (3840×2160)

Having a resolution proportional to the size of your screen will give you ample viewing possibilities and a beautiful, crisp image. Good luck finding monitors that support such resolutions, though!

So, What Should You Get?

Get something that pleases you. Test it out. Abuse it (reasonably, of course). Make sure that you don’t regret ever buying it. And, most importantly, ignore the evil little numbers that misguide you into buying something that, in reality, has less to offer than it advertises. If you have monitor questions, the comments area is open for you at any time.

What Are Powerline Adapters?