Commercial audio editing programs are pretty expensive. Adobe Audition, one of the most reputable audio editing suites, costs $349 for a full license. But did you know that there are alternatives that, when used in combination, will cost you nothing? That’s right. If you’re looking to edit some simple pieces, and don’t need to use any sequencer or special equipment to record, you don’t need to shell out hundreds of dollars in software. There are better alternatives, and they’ll all be presented below.

Perhaps one of the best free applications for audio editing, Audacity lets you record audio, convert tapes into digital format, edit several different types of audio files, create mixes, adjust the playback speed of your clips, and do a whole lot of neat stuff! This application comes with compatibility for Windows, Mac OS X 10.4, and Linux. If you want to do some serious editing without paying a dime, this one’s your bet. The interface, however, is rather simple and dull. But who needs a pretty interface when editing audio? Here’s a screenshot:

Audacity isn’t the only software out there that’s free. You’re probably looking for something more hardcore, and Audacity just doesn’t show you everything. Perhaps Wavosaur is your app. It looks similar, but it’s got a bit more complex of an interface that lets you do slightly more. Here’s the cool part: You don’t even need to install it. It comes in a portable executable that you can just plop into a folder and use right out of the box. Here’s how the interface looks:

As you can see, you get a great deal of tools that can help you map out and edit your audio without needing expensive tools like Adobe Audition. Here’s the download link.

Want something easier to use? Confused by all the buttons and knobs? Jokosher has a much simpler and more user-friendly interface. But don’t let the simplicity fool you. It’s just as powerful as the other contenders, if not more! You get to do stuff like add and edit multiple tracks of audio, composing a mix. The interface is much “prettier” and more intuitive, with everything in the place it belongs in. Let’s have a look:

This application is compatible with both Windows and Linux; and you can download it here.

If you’re looking for an application with an amazing interface and color relief for the eyes when you’re working late nights, this is your software. Linux MultiMedia Studio may have a “Linux” in its name, but that doesn’t mean that the developer didn’t port it to Windows. Linux MultiMedia Studio (LMMS) has a vast amount of features that make it seem almost exactly like Adobe Audition, minus the $349 price tag. Perhaps one of the most interesting things about LMMS is its ability to let you sequence and compose music – something that, until now, hasn’t been mentioned about any of the other audio editing programs. 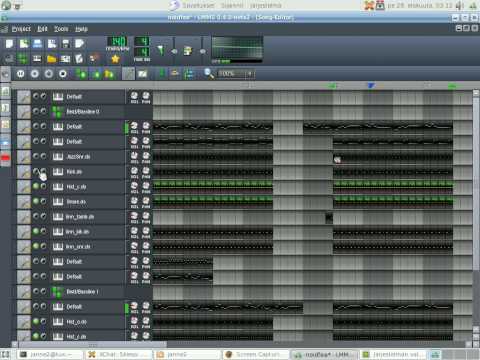 The above video shows you the program at work. There’s not much that can beat this kind of software! Get it here.

Liked What You Saw?

If you’re using something that you feel better about than what’s been listed here, and it’s free, post it in a comment below!

5 Ways to Apply an Equalizer to Your Music in macOS