Everyone needs a decent place to live. It doesn’t have to be a huge place, and it doesn’t have to be gorgeous accommodations. It just needs to be an adequate shelter to store your belongings, provide a place to cook your food and rest your head, and protect you from the weather.

An Austin-based startup has found a new way to use 3D printing, according to a report by the World Resources Institute’s Ross Center for Sustainable Cities. They’re using it to solve the housing crisis by creating homes for just $4000 that can be produced within 24 hours.

A New Kind of “Tiny House”

ICON has put together this process of using 3D printing to build a single-story 650-square-foot house. It’s built out of cement and takes between 12 to 24 hours. And that’s the whole house, not just the foundation. It’s a completely different idea for a “tiny house.”

The company uses the Vulcan printer to create the entire home. Right now the cost is sitting around $10,000, but the plan is to get the cost down to around $4000 for each home. Minimal waste is created, and the cost of labor is greatly reduced.

The printer is also capable of printing a home that is 800 square feet, which puts it at around twice the size of a typical tiny house but around the average size of an apartment in New York.

The first model has been built in Austin. It has a living room, bedroom, bathroom, and a curved porch. Jason Ballard, one of ICON’s founders, will use it for an office. “We are going to install air quality monitors. How does it look, and how does it smell?” he explains. 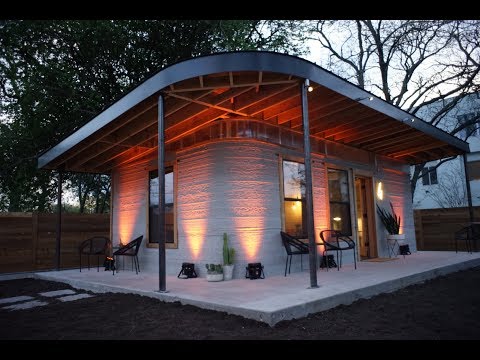 He notes that there are other companies that are printing homes and structures, “but they are printed in a warehouse, or they look like Yoda huts. For this venture to succeed, they have to be the best houses.” He believes using cement will help skeptics see the structure as sturdy. “I think if we were printing in plastic, we would encounter some issues.”

How They Plan to Use It

The plan is to create an entire community of these 3D homes, a total of 100, in El Salvador next year. ICON partnered with the non-profit New Story that has been contracted to provide international housing solutions.

“We have been building homes for communities in Haiti, El Salvador, and Bolivia,” reports Alexandria Lafci, New Story’s co-founder.

Once all the testing is done, the Vulcan printer will be moved to El Salvador to begin creating those 100 homes. Eventually they’d like to build these 3D homes in the United States as well, believing it could solve the housing shortage, while acknowledging labor unions might not to in favor of this plan.

And still, the plan is to maybe even take this much further, to build communities not of this world. “One of the big challenges is how are we going to create habitats in space,” Ballard explains. “You’re not going to open a two-by-four and open screws. It’s one of the more promising potential habitat technologies.”

Is this something you could live in? Could you live in a cement home created by a 3D printer? Or would you prefer to stick with a more traditional home? Let us know our thoughts on this new technology!

Google Storage Will Cost You and Delete Your Files

Drone Delivery Gets Clearance from FAA