One of the advantages of the Ubuntu Software Center is that it lets you see what applications are preferred by other Ubuntu users. In the “Sounds & Video” category, there are several different music players available. Three of the top rated programs (in alphabetical order) are Audacious, Clementine, and Qmmp. Each player takes a different approach to playing your music: Audacious and Qmmp are playlist based media players where as Clementine is a full blown media manager as well as media player.

All three programs can be downloaded and installed via the Ubuntu Software Center either from the “Sound & Video” category or by using the search box. Here is an overview of these three top rated music players.

Audacious is a simple media player with support for a wide range of audio formats including MP3, AAC, OGG, FLAC, WAV and WMA. It works using playlists which you create manually by adding files and directories to the list. The list can then be saved for later. If you just want to listen to one album then you would just quickly add those files to a new playlist and start listening. The advantage of playlists is that you can create your own lists for different genres, themes or moods. However there is quite a bit of initial work to create, populate and save those lists, but once all the hard work is done, you will have playlists for every disposition. 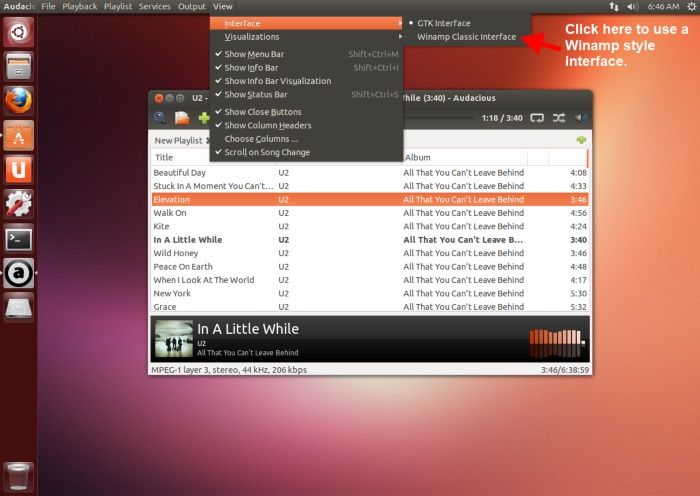 The biggest disappointment of Audacious is the initial GTK Interface. It looks out-dated and unrefined. When I initially saw it, I thought I must have downloaded the wrong program. However the interface can be changed by going to the View menu and selecting “Interface -> Winamp Classic” Interface. The GTK interface is then replaced with a sleek Winamp type look which you can tweak using standard Winamp skins. 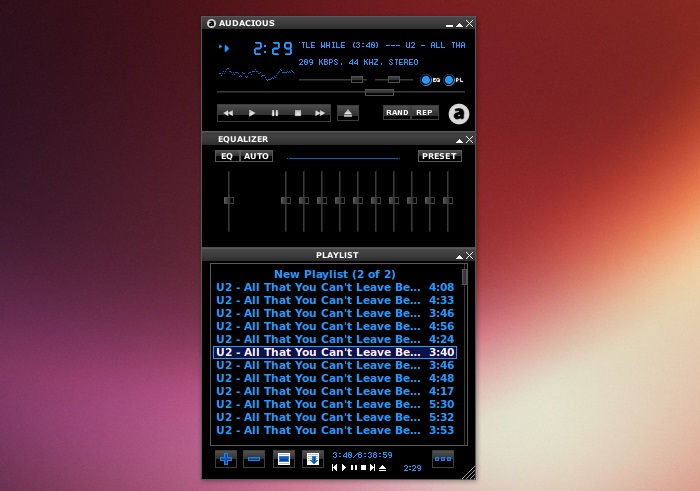 The player also has an equalizer, a few visualization modes and support for plugins.

Clementine takes a very different approach than Audacious and Qmmp. It is a full media manager with a smart library (that automatically scans your music folders for new songs) and it also works with a variety of online services such as Last.fm, Spotify, and SoundCloud. 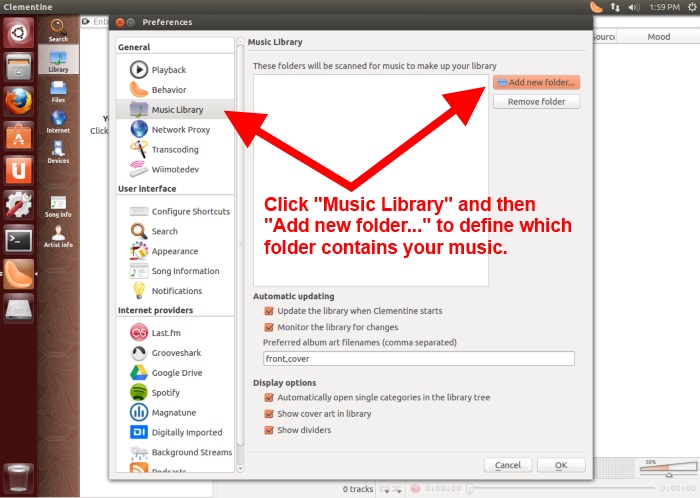 After the initial install, go to Preferences -> Music Library and add a new folder, most likely your Music folder. Clementine will scan this folder and using the tag data in the audio files, it will build a smart library which allows each album and artist to be found alphabetically plus it will generate some smart playlists including: 50 random tracks, Favorite tracks, Never played and so on. There is also a built-in directory browser which shows you the media as you have them organized in your Music directory.

The search function will find music in your media library but it will also query the various online services to try and find the music. If you have premium accounts with services like Spotify and Last.fm, this means you can stream songs directly from them. Without a premium account, you can still do things like Scrobble music on Last.fm and so on.

Clementine is also available for Mac and Windows.

Qmmp is similar to Audacious in many ways except that it uses Qt rather than GTK as the user interface toolkit. However since the UI mimics that of Winamp, any actual Qt specific styles are buried deep in the program and can only be seen when using the file open dialog or changing the preferences etc. 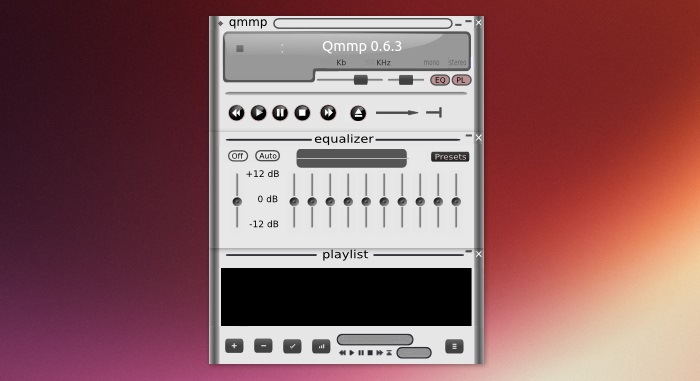 Qmmp is playlist based like Winamp and Audacious, so you need to create playlists in a very similar fashion to the others. In many respects, Audacious and Qmmp function identically because they are both based on Winamp. However Qmmp has more features. It supports more esoteric media formats like chiptune, Musepack and midi plus it has plugins for Scrobbing on Last.fm, a lyrics plugin and cover plugin, to name a few.

Clementine is clearly the most sophisticated and feature rich media player of the three. Its full media manager and support for various online services places it above the other two. However Audacious and Qmmp are trying to be faithful clones of Winamp. If you like Winamp then Audacious and Qmmp might be a better fit for you. On Ubuntu it doesn’t really matter if you use a GTK or Qt based application, on other distributions you might be forced to choose one or the other depending on toolkit support. Between Audacious and Qmmp, the latter is probably better due to its extra functionality and the fact that Audacious’ bland GTK interface is an eye-sore until you switch to Winamp mode.